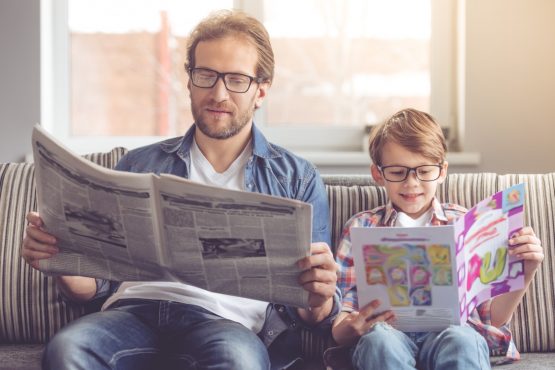 Dads could make Father’s Day count a whole lot more if they use the day as an opportunity to educate their children about things they don’t usually get much guidance on - like savings and retirement. Picture: Shutterstock

We all know how much of a cliché events like Father’s Day have become: just another marketing opportunity for retailers to hoodwink us into buying gifts that probably don’t meet much of a need (another tie that will just gather dust in a cupboard, a fishing rod that will forever remain dry).

But that doesn’t mean that these sorts of days should be ignored. Perhaps it’s time to think more creatively about ways to turn the focus to things that are more meaningful. It is expected that children will spend time with their dad on this day; maybe there is an opportunity for dad to put the time together to good use.

One way of making Father’s Day count a whole lot more is for dads to use the day as an opportunity to educate their children about things they don’t usually get much guidance on.

Most young people, for example, learn about saving and investing only once they’re well into their working lives. In many instances, they realise much later how much better their financial position in adulthood could have been had they known what they should be doing at an early age.

In fact, numerous studies show that there are significant gaps in knowledge about money matters among young adults. It is exactly at this time – when they are beginning to enter the formal economy, earning a salary and having to pay rent and vehicle finance and so on – that young people can get caught in a debt trap that may result in financial difficulties that will plague them for many years.

I believe that one should be open with one’s children about money matters. We tend to want to cover up unpleasant information about finances, but it could be a great life lesson if parents let their children in on the story.

So, for instance, if a grandmother struggles to afford medical care, discuss this with your teenage or adult children. Not only will they be much more empathetic with older people, they will also have learned about things that can go wrong with one’s finances during retirement. That’s a great life lesson.

The fact is that the earlier a person starts saving – for retirement or any other long-term goals – the greater the benefit. Thanks to the effect of compounding, money invested over time will grow. It will grow and the growth will be added to the original capital amount, which means that the capital sum is bigger and so the growth will be bigger too, and so on in a virtuous cycle.

Young people who learned about these concepts early would have a big advantage over others.

Parents should also be talking to their young adult children about other good policies regarding personal finance. Celebrations like Father’s Day presented a good opportunity to bring up topics such as the risks of using excessive credit, especially when one was borrowing money to buy items that were not really needed, such as extravagant Father’s Day gifts.

With South Africa having a notoriously high incidence of credit usage – ‘among the highest in the world’ – parents should be cautioning their children about the dangers of becoming swamped by credit.

When households use excessive credit it can put any savings they have under threat because the cost of debt can wipe out the positive effect of savings.  Essentially, children should be taught about being patient and saving for luxury items.

So, fathers – in fact, all parents – should be talking to their children about how to structure their financial affairs and why it’s important to save, both for things needed in the immediate future, and for the long term.

Food for thought this Father’s Day?

Steven Nathan, is the chief executive of 10X Investments and a father of three.

You need to install virtuous behaviour and attitudes in your kids BEFORE puberty.

Leave this stuff until afterwards, and you’ll be fighting an uphill (and often losing!) battle against two of the most powerful forces known to parents : teenage hormones, and peer pressure.

Colour me cynical but a child growing up in SA needs to be street smart. Push boundaries noting that the regulatory environment in compliance, licencing and enforcement is lackadaisical and corrupt. Honesty is pretty much unknown. Be very situationally aware as regards crime and personal injury (or death). Understand how to bribe a policeman or official to stay out of jail, regardless of whether a crime may have been committed or not. Be aware of the pc trends as regards prosecution by race.

Otherwise focus on a good qualification and requirement package for emigration.

Paul, its called survival in the third world.

These financial advisors and fund managers go on ad nauseam about saving and investing yet most can barely show any positive real returns.