What was once the second biggest exchange-traded fund investing in sustainable emerging-market companies just became a shadow of its former shelf.

In the two days leading up to Christmas Eve, the iShares ESG MSCI EM Leaders ETF (LDEM) lost 91% of its investments, leaving its total assets depleted at just $69 million, compared to $803 million on December 21. That’s the biggest two-day outflow for a developing-nation ETF this year, according to data compiled by Bloomberg.

The blow comes less than two years after the fund was launched with great success and the backing of Finland’s oldest pension company. LDEM tracks an index containing large and mid-cap emerging-market stocks that meet certain environmental, social and governance criteria. 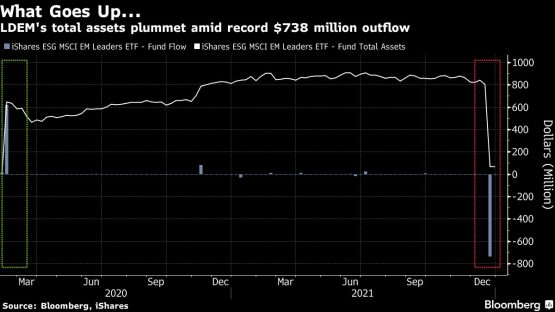 The fund’s number of shares outstanding also dropped to just 1.2 million, the lowest ever. Bloomberg-compiled data show that one holder of LDEM’s shares owned enough to account for such a steep drop: Ilmarinen, the Helsinki-based pension company that made a $600 million investment in the fund when it launched in February 2020.

Ilmarinen also owned shares of two similar funds, which buy ESG companies in the US, according to filings as of September 30. Neither the iShares ESG MSCI USA Leaders ETF (SUSL) nor the Xtrackers MSCI USA ESG Leaders Equity ETF (USSG) suffered large outflows in recent weeks.

The withdrawal is a reminder that when positions are pared back like this, “the liquidity of an ETF will dry up essentially overnight,” said Todd Rosenbluth, director of mutual fund and ETF research at CFRA. And “emerging markets have significantly underperformed this year.”

Shares of LDEM traded at $57.68 as of the close on December 28, lingering near the lowest in over a year.