Over fears of slowing domestic and global growth.
By Mfuneko Toyana, Reuters 1 Oct 2019  11:22 South Africa’s seasonally adjusted Absa Purchasing Managers’ Index (PMI) sinks to its lowest level in a decade in September, on weak demand linked to fears over slowing domestic and global growth, the survey showed on Tuesday.

The index, which gauges manufacturing activity in Africa’s most industrialised economy, fell to 41.6 in September, from 45.7 in the previous month.

The decline in the headline figure was led by a sharp drop in three of the five sub-components: new sales orders, purchasing inventories and business activity, Absa said.

The figure was the lowest reading since August 2009, during the global financial crisis, and the eighth time since January that the index has been below the 50-point mark separating contraction from expansion.

South Africa expects economic growth of less than 1% in 2019 after a sharp slowdown in the first quarter that followed nationwide power outages as state-owned utility Eskom struggled with breakdowns at its aging coal stations and a cash crunch.

Subdued growth in the eurozone and the trade dispute between China and the United States have hurt exports.

South Africa’s manufacturing output slipped 1.1% in July after a 3.6% contraction in June, and August output data due next week is expected to show another decline.

“It is unlikely that the South African manufacturing sector will improve on a sustained basis at a time when our key trading partners are struggling,” Absa said in a statement.

Last week the South African Reserve Bank said it saw 2019 economic growth at 0.6%, well below the 1.5% expansion the treasury forecast in February.

They are going to loose the battle to turn this ship around. Yet they will continue down the same path just like …………. You know what I mean.

It was to be expected.

SA is becoming a proud and leading 3rd world country.

(Not appropriate to classify SA as a “developing” nation. A new sub-class should be considered where SA can be listed among the “unravelling” nations.)

Priorities: Sort out Eskom to provide guaranteed supply of electricity and incentivise foreign investment with manufacturing bias with tax breaks , fast tracking of visas etc. As in, do whatever it takes! 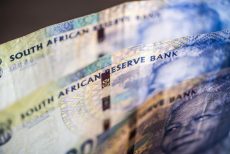