Health officials on the continent are bracing themselves for the worst-case scenario.
Samuel Gebre, Bloomberg 8 Mar 2020  16:17 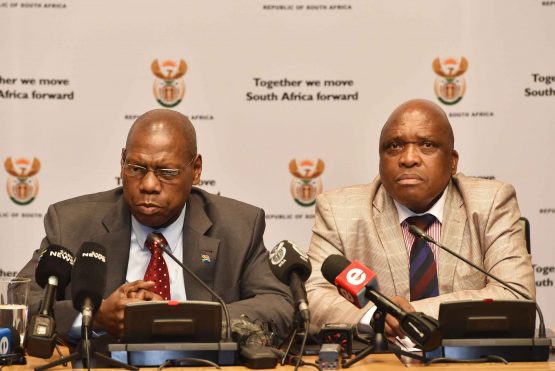 Minister of Health Dr Zweli Mkhize briefs the media on the first case of Coronavirus in South Africa at the Imbizo Media Centre in Parliament, Cape Town. Image: GCIS

The Africa Centres for Disease Control and Prevention says it’s ramping up expertise across the continent to help fight the spread of the novel coronavirus.

The CDC has trained laboratories from 43 countries as Covid-19 cases have been reported in nine African countries, including Nigeria, Egypt and South Africa. Globally, around half the world’s nations have now reported cases of the coronavirus.

Africa CDC was founded in 2017 to support nations to improve surveillance, emergency responses and prevention of infectious diseases.

“We want to capacitate member states so they can quickly detect and mitigate the effects of the disease in Africa, and, if widespread transmission occurs, prevent severe illness and death,” Africa CDC Director John Nkengasong said in a statement.

Representatives across the 43 laboratories have been trained to “isolate and transport the virus and test for it in the laboratory” and received kits. Africa CDC also provides additional kits for 1 000 tests to any country that reports cases.

The rapidly spreading virus has wreaked havoc across much of the developed world, infecting more than 105 000 people and killing more than 3 500 people.

So far, cases across Africa remain in the dozens rather than hundreds, and it’s the continent that’s least equipped to deal with the highly infectious outbreak. Health officials on the continent are still bracing themselves for the worst-case scenario.

International African hubs such as Ethiopia that are yet to record a single case are allocating funds, setting up isolation centres and closely screening international travellers. Ethiopia is screening travellers from China, Italy, Japan, Iran and South Korea, the Ethiopian State Minister for Health, Lia Tadesse, said in an interview.

Travellers that arrive in Congo from the four countries with no signs of coronavirus face home quarantine for 14 days, according to Longondo. Anyone with symptoms replicating the virus “will be transferred to an isolation site” controlled by the health ministry, the official wrote in letters to the nation’s embassies, which were seen by Bloomberg News and confirmed by Longondo.