Under her leadership, the IMF allocated about $30 billion in reserve assets to African economies.
By Katarina Hoije, Bloomberg 5 Oct 2021  22:28 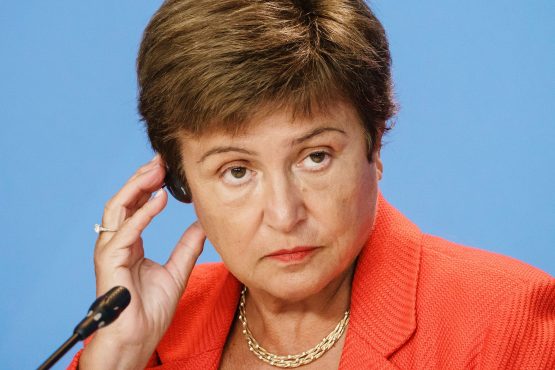 A group of African finance ministers praised International Monetary Fund Managing Director Kristalina Georgieva’s leadership after she was accused of improperly pressuring subordinates while at the World Bank to adjust a ranking in China’s favor.

Ministers from 16 countries, including Nigeria, Egypt, and Ethiopia, described Georgieva as a “true partner” to African nations, seeking to mobilise funding to tackle the fallout from the coronavirus pandemic. The signatories are represented by executive directors who wield less than 10% of the fund’s voting power.

The allegations made by a law firm in a probe last month are “serious and should be investigated,” the ministers said in the statement published Tuesday on the website of the Senegal’s Finance Ministry. “However we also believe this should be done in a manner that doesn’t undermine the integrity of the IMF and most of all, must allow for a fair and just process.”

Under Georgieva’s leadership, the IMF allocated about $30 billion in reserve assets — known as special drawing rights — to African economies, and urged wealthy states to direct some of their allocation to countries lacking the means to cope with the Covid-19 crisis. Sub-Saharan African countries in 2020 received thirteen times the annual average lending from the IMF.

Georgieva’s also supported African governments in exploring ways to extend their debt maturity — including relief for the poorest nations.

Georgieva was accused of improperly intervening in the World Bank’s “Doing Business” report to boost China’s business-climate rating. She has rejected the allegations and the report, once used by investors — and often touted by governments — as a gauge of competitiveness, has been discontinued.

While countries like Hungary stepped up support, the top IMF official got a cold shoulder in Washington in the wake of the scandal. U.S. Treasury Secretary Janet Yellen declined to return Georgieva’s calls, people familiar with the matter told Bloomberg last week. China is a major creditor to many African nations.

The IMF’s “leadership has been an important element in the response to the crisis,” the African ministers wrote. “We can confidently say that she has brought a human touch to development and to the organizations she leads.”