An important signal will be if it calls for an early meeting of its NEC.
By James Macharia, Reuters 3 Apr 2017  14:14 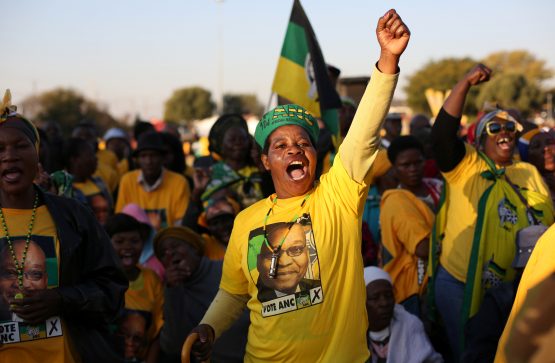 Senior members of the ruling African National Congress met on Monday to discuss the political fallout from South African President Jacob Zuma’s controversial sacking of his finance minister and markets showed their displeasure at the move.

The ratings agency Standard and Poor’s quickly weighed in with some downgrades and the rand fell about 2% at the start of trade.

Zuma faces a confrontation with other leaders of the ruling ANC after he dismissed the internationally respected Pravin Gordhan at midnight on Thursday. The sacking threatens to split the upper echelons of the ANC down the middle.

S&P downgraded South Africa’s sovereign debt to junk, to BB+ from BBB-, and said: “In our opinion, the executive changes initiated by President Zuma have put at risk fiscal and growth outcomes.”

The rand, after its two percent fall, later recovered to trade 0.5% weaker, as the market factored in the strong resistance to Zuma. Government bonds also weakened.

Analysts suggest those meetings could set up a showdown between Zuma and some of the party’s leaders. If so, Zuma still has the support of Chairwoman Baleka Mbete and Deputy Secretary-General Jessie Duarte, marking a straight split among the party’s “Top Six” leaders, sources said.

Spokesman Zizi Kodwa said the meeting of the “Top Six” was still taking place and the party’s National Working Committee would meet on Tuesday before a decision was taken on how to handle the fallout from the sacking of Gordhan.

“The ANC must remain and it must emerge stronger than it was last week,” Kodwa said, but declined to give further details.

An important signal will be whether the party calls for an early meeting of its National Executive Committee (NEC). The committee is the only body that can remove the leader of the party, other than its party congress, which occurs only every five years.

In November, Zuma defeated a no-confidence vote at a meeting of the executive committee, which was called after an anti-graft agency asked for an investigation of alleged influence-peddling by the wealthy Gupta family, whom Zuma has called his friends. Zuma and the Guptas have denied any wrongdoing.

Any such meeting by the NEC “is the much more important event for markets to focus on,” Nomura analyst Peter Attard Montalto said.

The opposition leader Mmusi Maimane, head of the Democratic Alliance, has called for a no-confidence vote against Zuma. On Monday, he urged South Africans “to join this Friday’s march for change” against Zuma in the commercial hub of Johannesburg.

A handful of protesters from civil society groups gathered outside the Treasury in the capital Pretoria to criticise Zuma’s sacking of Gordhan.

The new finance minister, Malusi Gigaba, said he would pursue “tough and unpopular choices” to help a flagging economy.