The miner commits to growing its business.
By Thomas Biesheuvel, Bloomberg 8 Jan 2020  19:04 The new project adds a major potash resource for Anglo as the company looks to retreat from thermal coal. Image: Nadine Hutton, Bloomberg

Anglo American has moved to buy a giant UK potash mine that was running out of money, adding another major growth project for the century-old miner.

The deal for Sirius Minerals is likely to secure 1 200 jobs and save the development of a mine in one of the UK’s most economically deprived areas. It’s also a further sign that Anglo is committed to growing its business — adding a second major project to its Peruvian copper-mine development — at a time when most rivals are reluctant to expand.

Anglo said it’s in advanced talks with Sirius about a possible 5.5 pence-a-share offer that values the company at about $508 million. While that’s a premium of 34% on Sirius’s closing share price on January 7, the company was worth more than $2.3 billion 18 months ago, before its funding plans dried up. 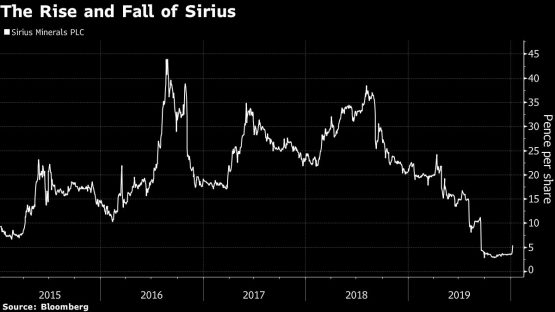 Sirius’s plans were thrown into doubt last year after it suspended a bond sale, required to unlock a $2.5 billion credit facility from JPMorgan Chase & Co. The company was forced in November to scale back its plans, but had also said it was talking with potential investors or buyers.

Anglo said it will build the mine for the same $3.1 billion that Sirius earmarked in its updated plan. Anglo shares fell 0.5%, while Sirius rallied as much 46%, before trading 35% higher as of 4:04 pm in London.

Sirius debt owners were the big winners, with the company’s $106.6 million of convertible bonds tripling. An offer to acquire all or a majority of the company’s shares triggers a so-called change of control clause in the bonds that allows creditors to redeem the debt.

The deal will be a huge relief for an economically depressed region. Overlooking the seaside town of Whitby, the setting for part of Bram Stoker’s “Dracula,” Sirius has already started work on two giant shafts and a 37-kilometer (23-mile) tunnel to transport the potash to the port at Teesside. Once a key steelmaking region, it’s fallen on hard times as plants closed. Some locals are set to benefit from mineral rights, while others have bought shares in the company.

Sirius, backed by Australian billionaire Gina Rinehart, plans to extract polyhalite from a mine more than a mile deep. One of the shafts is already more than 100 meters deep, with 1,200 staff and contractors on site.

So far, the company has spent about $1.5 billion, including building a plant to make concrete supports for the tunnel. Once in production, Sirius planned to employ about 1,000 people and export $2.5 billion in potash each year.

For Anglo it adds a major potash resource as the company looks to retreat from thermal coal.

“We are unashamedly transitioning our portfolio to later cycle products that we believe the world will need as it goes forward,” Chief Financial Officer Stephen Pearce said on a call with reporters.

The miner has been cutting thermal coal production in recent years, with output falling from as much as 80 million tons to less than 30 million tons. In recent months, it has been hinting that it will look to move away from the dirtiest fuel altogether.

It also further separates Anglo from its larger diversified rivals. The company is already in the process of building a $5 billion copper mine in Peru, albeit with a Japanese partner to cut the cost and risk. While the company has also been returning money to shareholders, it’s been more measured than Rio Tinto Group and BHP Group.

“We fundamentally believe part of our responsibility is to keep an eye on growth over all the aspects of different time frames,” said Pearce. He said the company doesn’t expect the deal to change its dividend policy.

It also marks a return for Anglo both to fertilizer and the U.K. The company sold its phosphates business in Brazil in 2016 as it looked to weather a crisis. It exited the U.K. before that, when it sold its Tarmac business.

Sirius said on Wednesday that, subject to the successful outcome of talks, it has indicated to Anglo that it expects to recommend a firm offer at the price set out in the proposal.

Anglo said it reserves the right to reduce any offer by the amount of any dividend or other distribution by Sirius. Under UK takeover rules, the company has until February 5 to announce a firm intention to make an offer.

Bank of America Corp. and Centerview Partners UK LLP are the joint financial advisers to Anglo, while JPMorgan is advising Sirius.