Miner will decide in the next year if thermal coal fits into its future portfolio, RBC Capital Markets says.
By Thomas Biesheuvel, Bloomberg 12 Nov 2019  12:19 Anglo American has lowered its 2021 thermal coal target to 26 million tons from a previous goal of as much as 30 million tons. Image: Chris Ratcliffe/Bloomberg

Anglo American dropped another hint that its days of mining the world’s most polluting fuel are limited.

In a slew of presentations released for an investor visit to Anglo assets in Australia, thermal coal was noticeably absent from a list of units seen to have long-term potential. The company is on a trajectory away from thermal coal, and will do so responsibly, an Anglo spokesman said.

Anglo will decide in the next year if thermal coal fits into its future portfolio, and may be better off selling the assets, RBC Capital Markets said in a note following the presentations.

Anglo has spent decades positioning itself as an environmental and social champion, from treatment plans for employees with HIV or tuberculosis, to developing new ways to mine with less water. 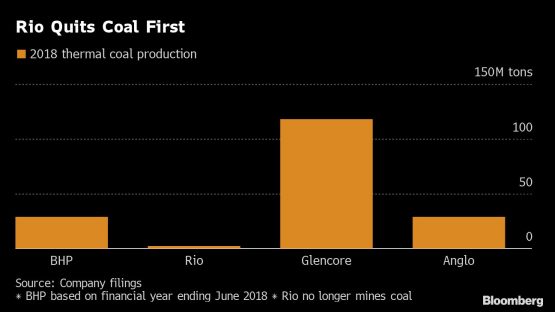 Yet on thermal coal it risks getting left behind, as investors quickly ratchet up the pressure. Rival Rio Tinto Group sold its last coal mines in 2018, making it the first major mining company to go coal-free. BHP Group is looking at options to exit its remaining coal mines in Colombia and Australia. That would leave Anglo with Glencore as the only two Western majors with thermal coal assets.

The message from certain investors is clear. Norway’s $1 trillion wealth fund said earlier this year it would stop investing in companies that mine more than 20 million tons a year of thermal coal, a target Anglo would currently miss.

The company has sold coal mines in South Africa, including to Seriti Resources Holdings, which is planning to build a massive black-owned mining company.

“It may be that the assets would be better off in other hands,” RBC analyst Tyler Broda said in the note. “With rising ESG concerns, we would expect Anglo will divest this higher-quality and exports-focused business.”

The trend is to give away the undesirable coal mines to politically connected companies (with names like “Black Royalty”) to up one’s credentials to allow one to mine the desirable stuff.