‘Cash flow is strong, leverage is down, and all operations are running,’ Chief Executive Kelvin Dushnisky said
By Tanisha Heiberg, Reuters 11 May 2020  09:59 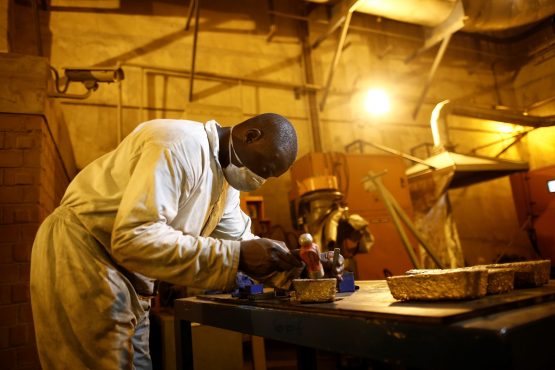 AngloGold Ashanti reported improved first-quarter cash flow on Monday but said it had lost 11 000 ounces of production because of coronavirus-related stoppages at its operations.

With stoppages at Brazilian, Argentinian and South African operations, total production dipped to 716 000 ounces in the three months to March 31 from 752 000 ounces in the same period last year, but the company reported strong performances from its Kibali, Geita and Iduapriem mines.

The miner withdrew its annual production guidance in March.

However, free cash flow before growth capital increased 231% year on year to $94 million, the company said.

“Cash flow is strong, leverage is down, and all operations are running,” Chief Executive Kelvin Dushnisky said in a statement.

AngloGold has resumed operations at affected mines, with South African mines able to produce at 50% capacity after the government lifted an order for most underground mines and furnaces to be put on care and maintenance as part of a nationwide lockdown.

AngloGold has also benefited from strong bullion prices on rising demand for a commodity widely perceived as a safe-haven investment in times of economic and political instability.

The company said it had bolstered liquidity to $1.1 billion after redeeming a 10-year $700 million bond and securing additional credit facilities of $1 billion.

AngloGold said it had built inventories of critical spares and ore stockpiles to improve its ability to respond to operational disruptions and limit the impact of the COVID-19 crisis.