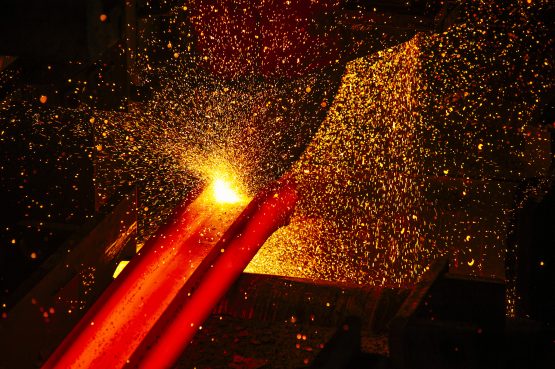 ArcelorMittal now sees European steel consumption dropping by up to 3% this year, the most since 2012. Image: Waldo Swiegers/Bloomberg

ArcelorMittal surged the most in more than two years after reporting profit that beat the highest analyst estimate, even as the company lowered its outlook for global steel demand.

Citigroup said steel deliveries in Europe were better than expected, and the higher earnings helped ArcelorMittal reduce its debt levels. Jefferies Group pointed to stronger cost controls as the reason for the profit surprise.

The results suggest ArcelorMittal, the world’s biggest steel producer, was able to surpass a lowered bar that analysts had set in a challenging environment for steel. Trade disputes have taken a toll on manufacturing demand, especially in the auto sector, and competition against cheaper imports has left the European steel industry in crisis.

ArcelorMittal surged as much as 8.7%, the most since February 2017. The company reported third-quarter earnings before interest, taxes, depreciation and amortization of $1.06 billion, a 61% drop from a year earlier. Analysts had expected $943.2 million.

“Expectations were very low going into the third quarter,” said Stijn Demeester, an analyst at ING. “The sky in the steel space isn’t falling down.” Other steelmakers climbed as well. Voestalpine added 3.3%. Aperam, a Luxembourg-based producer, gained 2.9%, extending a rally from yesterday when it also beat profit estimates.

Despite the cheer from investors today, the outlook for steel still looks grim. ArcelorMittal now sees demand in the US shrinking this year, as buyers reduce stockpiles. It also cut its forecast for Europe and trimmed the top end of the global demand outlook range. Excluding China, consumption is seen flat year-on-year.

“Demand in our core markets of Europe and the US has remained weak, reflecting depressed manufacturing activity and continued weakness in automotive, compounded by customer destocking,” the company said.

ArcelorMittal now sees European steel consumption dropping by up to 3% this year, the most since 2012.

One bright spot in ArcelorMittal’s outlook was China, where the company now expects an increase in consumption of as much as 2% this year. The nation’s real estate demand continues to remain robust, it said.

It is a bit alarming that a loss of $539 million was realized in the third quarter compared to a profit of $899 million a year earlier. That is an almost $1.5 billion swing in one quarter.

In SA it seems to be quiet with regard to their cost cutting measures.

AMSA has a tendency to leave things for the last minute and then make all kinds of cost cutting promises when they have to report their results.

Could be an uphill battle for them from here.