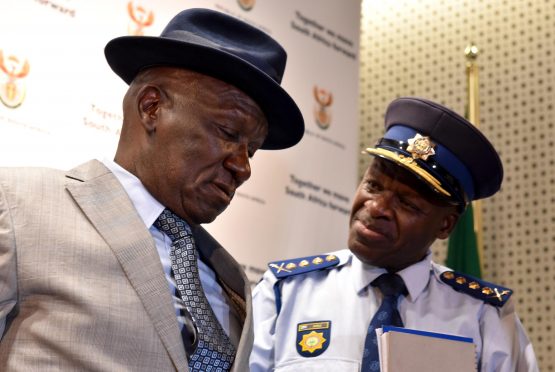 Police minister Bheki Cele is cracking down on gang-related violence at the Cape Flats in Cape Town. Picture: GCIS

South African soldiers pulled out of gang-ridden suburbs of Cape Town on Friday after a brief show of force, leaving residents uncertain about what to expect next.

Streets were quiet on Friday morning after a convoy of armoured vehicles and hundreds of soldiers deployed the previous day in Manenberg and Hanover Park to help police end a surge of gang violence that has killed hundreds of people.

Police and army spokesmen did not immediately respond to requests for comment on the operation.

“The army is a good thing for now, but when they are gone the gang fights will start again,” said Nizaam Sharmar, a 32-year-old construction worker.

Cape Town is famous for its tourist attractions, including Table Mountain, but has some of South Africa’s highest murder rates, official data shows.

There is an entrenched gang culture with thousands of young men belonging to street gangs with names like “Hard Living” and “Young Americans”.

Bloodshed over the past seven months in mainly poor black and mixed-race areas has killed more than 2 000 people, almost half gang-related, Western Cape provincial officials said.

The South African National Defence Force said last Friday it would deploy a battalion with support elements to communities in a vast area called the Cape Flats, where high unemployment rates and drug abuse have fuelled gang activity in apartheid-era townships and working class suburbs including Manenberg and Hanover Park.

“Innocent people are being shot and we need drastic change, but it’s just like they showing their faces and then leaving,” said 28-year-old mother of two Ledgeme, who did not want to give her full name for fear of reprisals.

The soldiers were promised following a visit by Police Minister Bheki Cele to the Cape Flats shantytown of Philippi, after almost a dozen people were killed earlier this month.

The SANDF performed what is known as a “tactical retreat”.

The gangs have recovered battle ground.

Wrong….no deal on overtime pay plus there wad a special at KFC

..you may have a point. I forgot the Army arrived for action just after morning tea-break (after 10h15), and had to observe lunch-break around 12h30m.

It’s good the gangs also don’t know what to expect next – hopefully the soldiers are nearby and ready to pounce the moment there’s trouble.

Somehow I expected the”Apartheid era” to be mentioned !!!! Must be Jan van Riebeecks fault after all ne !!!!!

For sure..need to blame someone for
Army being useless

The problem is that everybody who owns a cell phone is also a photographer and with the SANDF’s record of ill discipline, the government will expose itself very quickly to a flood of damage claims in court. Best not to take the risk.

SANDF is a shadow of its former self and cannot take on rag-tag rebel teenagers. The gangs are way too powerful for these retards

yeah, like the time they beat a tactical retreat from the rag tag swapo and disinterested island boys.

Cape Town has become a hell-hole.

No water, 24/7 traffic congestion, highest murder rate in the world…

The soldiers recognized too many of there kin on the other side of the firearm, social conflict of interest! Same reason the taxi drivers are allowed to run amok with nothing being done about!!!

Wish they would pull out other actions sooner, SA wouldn’t be faced with the problems it is!!

The hardest they worked in 25 years.

So, there it is, the SANDF is scared of the gangs. Never thought I’d see the day…

Cele -resign, you are a good for nothing.
PPC- build a wall around the Flats.

This is the same army that lost diamond rich Namibia to ill disciplined child soldiers and uninvested island boys. and went running when just two Migs joined the theater. The same army who bankrupted the country and forced the nats to give your kid’s future to the ANC.

Not sure what you were expecting.