An electronic stock board is displayed in the window of a securities firm in Tokyo, Japan. Image: Keith Bedford/Bloomberg

Asian stocks advanced Tuesday, on track for their biggest gain in two weeks, after a technology-fueled rally in the US amid positive economic data and the potential for further stimulus. The dollar held gains.

Japan, Australia and South Korea outperformed. S&P 500 futures were little changed. Earlier, the Nasdaq 100 reached a record as traders sought out companies poised to do best in a stay-at-home economy.

The dollar held gains after rebounding following its worst July in a decade, and Treasuries maintained losses after data showed US manufacturing expanded in July at the fastest pace since March 2019. 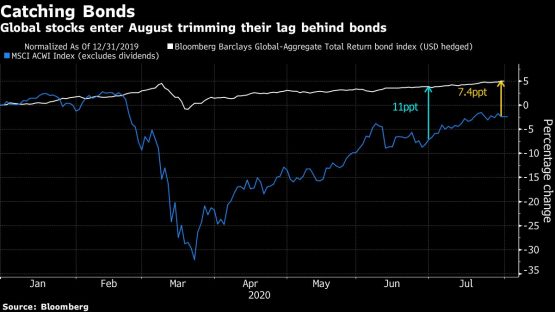 Global equities are closing in on levels last seen in February. US stocks got a boost after the White House was said to be exploring whether President Donald Trump can act on his own to extend enhanced unemployment benefits. A slowdown in the rate of coronavirus infections in a number of states also helped sentiment.

“The gentle hints that the global recovery remains on track continued,” Jeffrey Halley, a senior market analyst at Oanda Asia Pacific Pte, said in a note. “Hopes rose that the US might avoid a deeper recession which was all financial markets needed to send equity markets higher, and for the US dollar to continue recovering some of its recent losses.”

Meanwhile, tension between the US and China continues to simmer. Trump said TikTok will have to close its US business by September 15 — unless there’s a deal to sell the social media network’s American operations. Microsoft advanced as it tried to salvage a deal for the US operations.

Elsewhere, oil dipped after rising the most in nearly two weeks. Gold was steady.