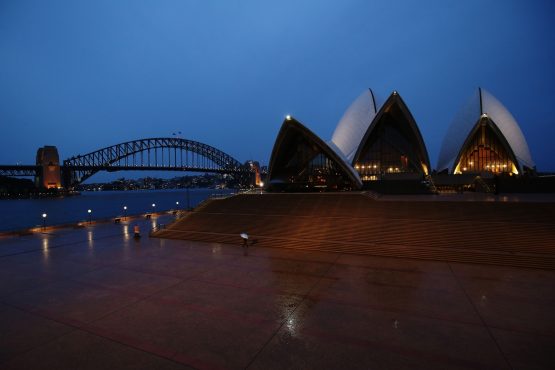 A pedestrian holding an umbrella walks along the Sydney Opera House forecourt during a partial lockdown imposed due to the coronavirus. Image: Brendon Thorne/Bloomberg

Australia’s economy contracted in the first three months of the year, setting up an end to a nearly 29-year run without a recession as an even deeper slowdown looms for the current quarter.

Gross domestic product fell 0.3% from the final three months of 2019, the first quarterly drop since 2011, brought down by a collapse in household spending, statistics bureau data showed in Sydney Wednesday. Economists had forecast a 0.4% drop. From a year earlier, the economy expanded 1.4%, matching estimates. The result sets up an end to Australia’s record run of avoiding two consecutive quarters of shrinking GDP, having dodged recessions during the 1997 Asian Financial Crisis, the Dot Com Bubble and the 2008 global financial crisis. The current quarter will see a deep contraction, with almost 600 000 jobs lost in April alone and much of the economy in lockdown to contain the coronavirus.

Treasurer Josh Frydenberg, speaking after the release, accepted this fate when asked directly whether the economy is now in recession.

“The answer to that is yes,” he told reporters. “That is on the basis of the advice that I have from the Treasury Department about where the June quarter is expected to be.”

Fiscal and monetary policy are working in tandem to rebuild the economy. The Reserve Bank of Australia has taken the cash rate near zero and lowered the cost of borrowing with its 0.25% bond yield target. The government has injected tens of billions of dollars into the economy to help tide businesses and households through the lockdown.

With the containment of the health crisis allowing activity to resume, the critical question is how quickly businesses can get back on their feet, workers regain employment and households resume spending.

“Growth should resume in the September quarter, but the impact of Covid-19 will surely cast a long and lingering shadow over the global economy and Australia’s recovery,” said Callam Pickering, an economist at global jobs website Indeed Inc. who previously worked at the central bank. “Continued support from fiscal and monetary policy will be necessary throughout 2020 and beyond.” 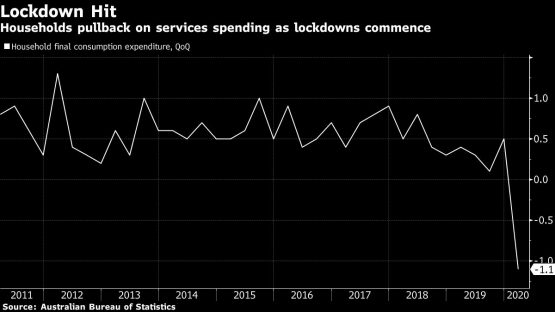 Rising commodity prices are boosting miners’ profitability, with the terms of trade 2.9% higher in the first three months of 2020, pushing the current account surplus to a record A$8.4 billion ($5.8 billion). Yet, miners will be keeping a watchful eye on the nation’s currency, which has surged almost 20% in the past two-and-a-half months.

“Typically backward looking national accounts releases contain an array of hidden trends that are often overlooked. Mining investment has climbed to a 7-year high, Australia’s terms of trade have risen and exploration intentions are elevated. This bodes well for the recovery.” – James McIntyre, economist

The economic outlook is improving as the restrictions are lifted, but will continue to be constrained by closed borders that are hitting tourism and education exports. The government is discussing a fresh round of fiscal stimulus to try to put residential construction back on its feet.

Lets congratulate them-0,3% contraction is not exactly a problem..certainly not after 29 recession free years. Yes-Q2 will be dreadful- so a recession but I suspect Q3 will show growth again.

That country and its little neighbour really seem to work well. Covid 19 well managed, solid democracy, low crime…we should look up at them as the success that they are!

The Au $ is about 50% overvalued. The worst is still to come.