The plan by some Group of Seven nations to ban new gold imports from Russia is “largely symbolic” as flows have already been restricted by sanctions, according to analysts.

The US, UK, Japan and Canada plan to announce the ban during the G-7 summit that started Sunday in Germany. While the UK government said over the weekend that “this measure will have global reach, shutting the commodity out of formal international markets,” analysts played down the potential impacts as the London Bullion Market Association, which sets standards for that market, removed Russian gold refiners from its accredited list in March.

Bullion climbed as much as 0.8% on Monday as the dollar weakened. Prices may have received a little initial support from the news, but most analysts said the sanctions are unlikely to have a longer-term impact.

“The impact from a ban on Russian gold imports by G-7 nations is likely to be fairly limited, given that the industry already took steps to restrict Russian gold,” said Warren Patterson, head of commodities strategy at ING Groep NV. “It looks as though its largely symbolic.” 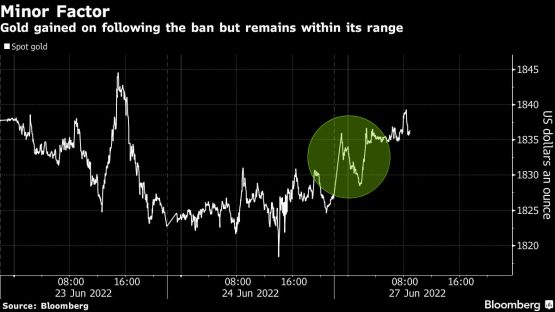 “While gold prices reacted positively to the news this morning, we see a limited fundamental impact of a ban,” Carsten Menke, an analyst at Julius Baer Group Ltd. “This is due to the low relevance of supply when it comes to the formation of gold prices.”

While the LBMA’s action and sanctions on Russian banks after the invasion of Ukraine have largely closed European and US markets to gold from the world’s second-biggest bullion miner, the G-7 pledge would mark a total severance between it and the world’s top two trading centers, London and New York. Russian gold had already become taboo in western markets, with the Swiss refining industry forced to deny it was responsible for a reported import from the country.

Vivek Dhar, a commodities analyst at Commonwealth Bank of Australia, said in a note that “a ban also just formalises what has largely been in place via sanctions” and he didn’t expect it to drive gold prices materially higher.

While bullion surged close to a record in March as the war in Ukraine boosted demand for the haven asset, prices are now little changed this year as central banks tighten monetary policy. Silver, platinum and palladium gained on Monday.