Repsol SA is the latest oil major to head to Europe’s debt market for fresh financing, with other large borrowers piling in as measures of credit stress ease for the first time in four days.

Eight issuers including Sanofi and LafargeHolcim Ltd are marketing new bonds on Monday, with Repsol following BP Plc, Royal Dutch Shell Plc and OMV AG in to the market. The strong start to a holiday-shortened week for sales comes as a gauge of European credit risk fell after Germany saw the lowest number of new coronavirus cases in six days and US President Donald Trump said he sees signs the pandemic is beginning to level off in the US.

“We expect primary to remain busy this week despite what would usually be the calm Easter holiday period,” Commerzbank AG strategists wrote in a note to clients. “Risks remain elevated, and unlike in other market phases the surge in issuance merely reflects issuers’ desperation to collect liquidity during an issuance window of uncertain length which could also close again quite abruptly.”

Repsol International Finance BV is offering two euro notes on Monday, including a 10-year tranche marketed at about 295 basis points above midswaps, according to a person with knowledge of the sale, who asked not to be identified citing internal company policy. That’s more than the 190 and 280 basis-point spreads better-rated peers Shell and BP paid to sell 12-year euro notes on April 2, according to data compiled by Bloomberg.

In Asia, Warren Buffett’s Berkshire Hathaway Inc. is set to join the record bonanza of corporate debt sales with a multi-tranche sale of yen-denominated bonds maturing in as long as 40 years later this week. The conglomerate is offering 10-year notes with a spread of 100-110 basis points, about double the 50 basis points it paid to sell similar-maturity notes in September.

Borrowers have been undeterred by a spike in financing costs sparked by the coronavirus pandemic, with risks still abounding as UK Prime Minister Boris Johnson was hospitalised after failing to recover from the virus. The number of confirmed global cases is nearing 1.3 million, with the death toll topping 69 000, according to Johns Hopkins data.

Many firms are building cash buffers to tide them over as the pandemic makes global recession certain, and others are expanding reserves for acquisitions. Worldwide debt sales blasted past a record $200 billion last week, with Oracle Corp. pricing a $20 billion offering and T-Mobile US Inc. raising $19 billion to help finance the acquisition of Sprint Corp.

“Issuers continue to have to pay up for the privilege of bringing new deals,” said Tomas Hirst, a strategist at CreditSights Inc. 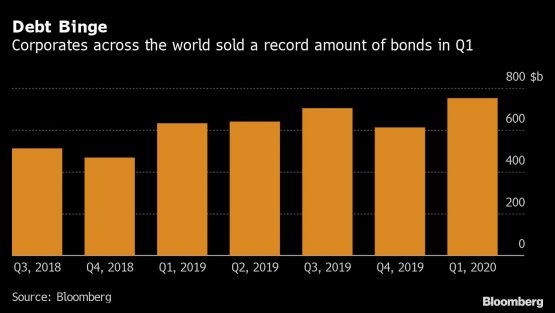