BHP Group Plc shares slipped on their last trading day as an FTSE 100 member as the miner’s near quarter-century association with the benchmark draws to a close.

London Stock Exchange Group Plc’s FTSE Russell unit confirmed this week that the company would be replaced in the index by Airtel Africa Plc, effective Jan. 31, following BHP’s decision to unify its structure in a single listing in Sydney.

The firm has had a presence on the U.K. blue-chip gauge since 1997, when Britain’s Billiton Plc was added to the index, according to FTSE Russell records. Billiton merged with Australia’s BHP Ltd. in 2001, creating a mining giant. 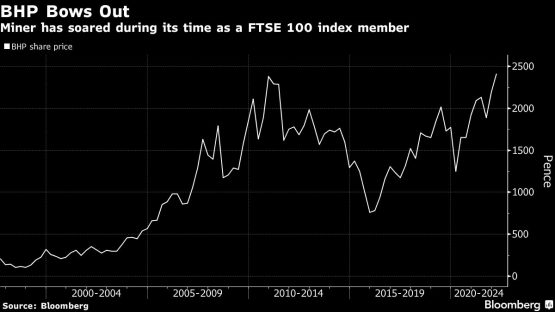 With a market capitalisation of about 124 billion pounds ($166 billion), BHP’s exit sees the FTSE 100 lose its third-largest stock, with only energy firm Shell Plc and drugmaker AstraZeneca Plc worth more.

BHP says its share unification will make the company more agile, while the firm is considering a return to large-scale M&A, Bloomberg has reported.