Bitcoin is on pace for its second monthly decline. Image: Christophe Morin/Bloomberg

Bitcoin’s sell-off is pushing it toward a key level that technical analysts say has provided support for the largest cryptocurrency. 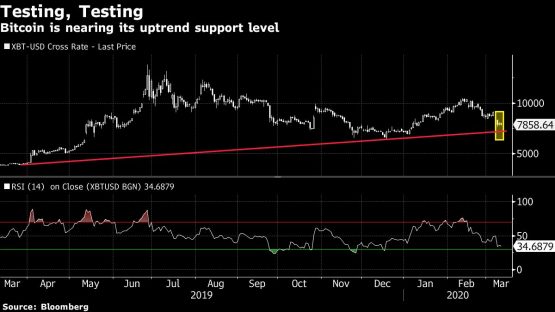 In addition, its 14-day relative strength index (RSI) crossed below 35 and is nearing oversold levels, potentially indicating it could fall further until it breaches 30. Assets are considered oversold if the RSI falls below that threshold.

Cryptocurrencies have offered little refuge during the latest market rout that’s seen U.S. stocks fall close to correction territory at the fastest pace on record. Bitcoin, which many argued could act like a haven during times of turbulence, has dropped in tandem, putting it on pace for its second consecutive monthly decline.

“Bitcoin is being swept up by everything that’s happening with traditional markets and being placed in the same speculative basket as the stock markets,” Mati Greenspan, founder of Quantum Economics, wrote in a note. Bitcoin has dropped 10% in March, after losing 7.3% in February. Peer coins, including Bitcoin Cash, Dash and Litecoin also sold off, with each falling more than 6% on Wednesday.

“Bitcoin remains in lockstep with risk flow and yet again, the market failed to react positively to another rate cut, this time by the Bank of England,” said Denis Vinokourov, head of research at Bequant, a London-based digital asset firm. “Fundamentally, given the magnitude of the recent selling, especially at a time when Bitcoin’s hashrate and mining difficulty remain near record highs, points to some price consolidation and bargain hunting.”