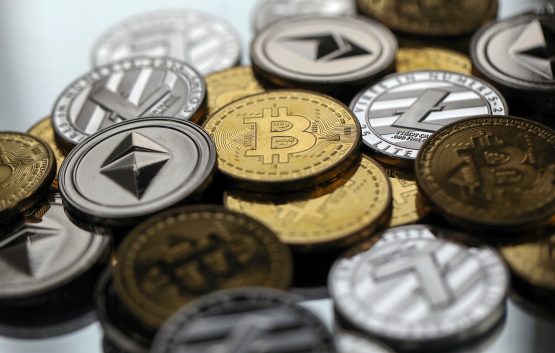 The largest cryptocurrency’s recent upward momentum carried it past that psychologically significant level on Sunday for the first time since October, according to Bitstamp pricing. It rose as much as 2.6% to $10 179, capping a gain of about 40% so far this year. 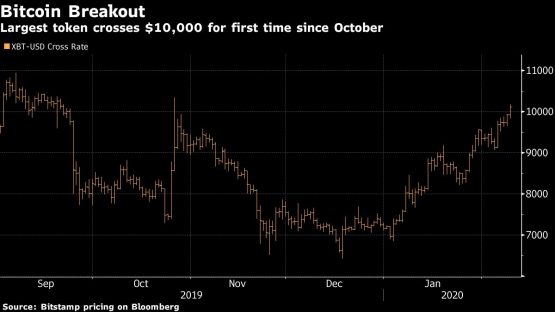 Its breach of five figures comes amid an equities rally that’s seen the S&P 500 Index reach new highs as fears abate that the coronavirus will dent global growth.

“The rally is a part of a broader appeal for risky assets as optimism grows that the coronavirus impact might be limited to the first quarter and on optimism that China will play nice with the US on phase-two trade talks,” said Ed Moya, senior market analyst at Oanda.

Cryptocurrencies have been on an upward trend all year, with some analysts and digital-asset enthusiasts suggesting they’ve benefited as safe-haven plays amid ongoing geopolitical concerns around the globe.

“There’s certainly a narrative in the investment community that Bitcoin is solidifying its place as a store of value, a flight to safety, inflation hedge,” Michael Sonnenshein, managing director at Grayscale Investments, said in an interview at Bloomberg’s New York headquarters. If history is any guide, the upcoming halving, which is set to happen in May, could also have an impact on the token’s price, he said.

Some Bitcoin enthusiasts are predicting further gains. Fundstrat Global Advisors’ Rob Sluymer, for one, sees it rising through the second quarter this year to trade in a range of $10 000 to $11 000. Mike McGlone, an analyst with Bloomberg Intelligence, says the 2020 outlook for the largest digital token remains favourable. “Similar to gold, positive fundamentals should extend Bitcoin’s price appreciation,” he wrote in a Feb. 5 note.

How is it different for banks or share portfolios on a stock exchange?

For sure….same effect. No internet. Can only hold physical gold….but it may melt away 😉 Phys cash? (subject to robberies)

How strong is the ‘chain’ within the ‘block’? Will it hold?

FIAT exist is digital form in any case, and money transfer companies does the role of crypto (to some extent)

The halving in May cuts the daily supply on BTC in half. The supply shock is vastly misunderstood, less supply, higher price. $20 000 BTC in play.