Global markets have been rocked in recent weeks by an escalating number of macro headwinds from the intensifying coronavirus outbreak to a shock plunge in oil prices. Image: Akos Stiller

Bitcoin is proving to be no haven asset amid the current global market meltdown.

The largest digital currency continued to plummet in Asia Friday as a rout that began in earnest overnight in New York showed no signs of slowing down. Bitcoin dropped as much as 32% to $3,915, its weakest since March 2019, according to consolidated pricing compiled by Bloomberg. Its 50% drop over the past two days is among the biggest ever.

The wider Bloomberg Galaxy Crypto Index tracking a basket of digital assets hit a historic low in data going back to August 2017, sliding 47% over the two session. Rival tokens including Ether, XRP, Litecoin and others are all down at least 20% across the board. 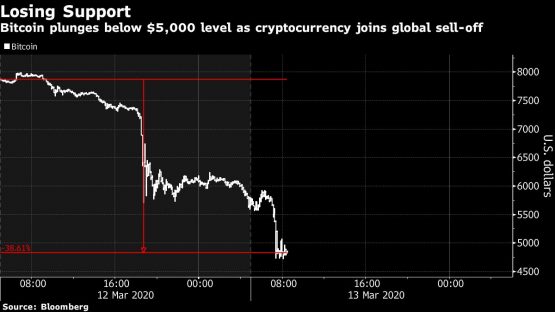 “This sell-off has caused cascading margin calls with the vast majority of investors shifting to exposure to cash,” said Wayne Trench, chief executive of digital asset brokerage and exchange operator OSL. “In this situation, correlation converges to 1 and even impacts potential ‘safe havens’ like gold and Bitcoin to varying extents.”

Global markets have been rocked in recent weeks by an escalating number of macro headwinds from the intensifying coronavirus outbreak to a shock plunge in oil prices. US President Donald Trump’s address to the nation Wednesday, which included curbs on most travel to Europe and unspecified relief spending, spurred further selling in equity markets around the world with the S&P 500 sinking the most since 1987 on Thursday.

Bitcoin is now down more than 50% from its most recent February high. The crypto had been on the upswing this year to that point, as investors looked ahead to the so-called “halvening” — a scheduled reduction in the Bitcoin mining rate designed to combat price inflation.

“Traders are pulling money out of Bitcoin to fund their margin calls on other asset classes,” said Ross Middleton, chief financial officer at crypto exchange DeversiFi. “Perhaps they think that there will be better short-term opportunities to go long other asset classes in the near future.”