Bitcoin broke above $7 500, its highest level since March. Image: Reuters

Buoyed by an overall shift in risk sentiment, cryptocurrencies surged on Thursday, with Bitcoin surpassing $7 500 for the first time since crashing in early March.

Bitcoin rose as much as 9.1% to trade at $7 556 as of 12:18 p.m. in New York, while the Bloomberg Galaxy Crypto Index — which tracks some of the biggest digital assets — rose as much as 6.3%. Bitcoin tumbled 27% on March 12 as financial markets were pummelled by the widening coronavirus pandemic. With the token nearing the top of its recent trading range, it could have enough momentum to break above the $8,000 level, says Ed Moya, a markets analyst at Oanda.

“Bitcoin is starting to attract retail interest again,” Moya wrote in a note. “With worldwide stimulus efforts showing no signs of easing, some traders are jumping into cryptos as a hedge against currency wars.”

Cryptocurrencies have largely moved in conjunction with riskier assets over the past month, falling when equities come under pressure and rising when they gain. Stocks rose on Thursday on the back of optimism that parts of the US economy may start to open soon and oil rallying, with the S&P 500 on pace for its best month since October 2011. 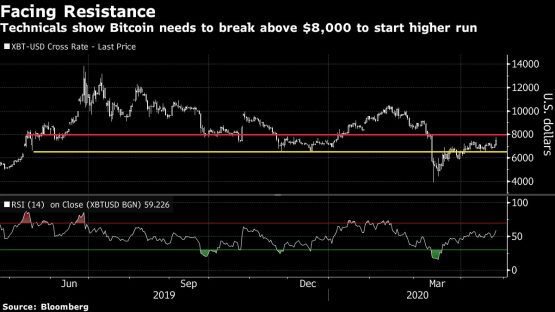 Technical indicators suggest Bitcoin needs to break above $8 000 to start a run higher. In addition, with the 14-day Relative Strength Index (RSI) at 59, it hasn’t entered overbought territory. Assets are considered overbought if the RSI exceeds 70. A break lower could mean Bitcoin falls to around $6 500, another major level of support.