Bitcoin milestone means fear of missing out is viral

The bubble has gone beyond the rational, or chartable.
By Lionel Laurent, Bloomberg Gadfly 29 Nov 2017  14:52 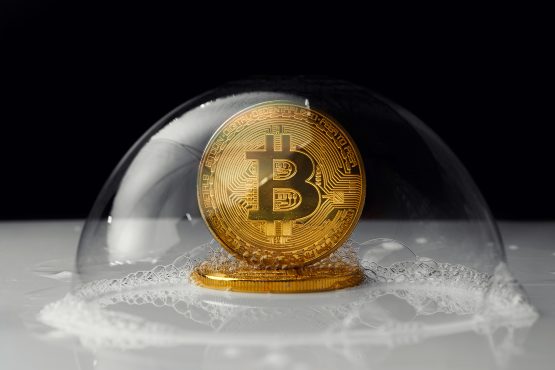 Bitcoin has tapped into a speculative urge that isn't looking to be reassured by dividends, business plans or cash flows, the writer says. Picture: Shutterstock

Everyone, from the Uber driver to the hedge-fund manager, appears to be afraid of missing out on the Bitcoin bubble.

That’s about the only real takeaway we have from the latest symbolic milestone for the granddaddy of cryptocurrencies. Its price in dollars has multiplied ten-fold this year — without any of its flaws as a method of payment being fixed convincingly. Transactions are still costly and slow. Wall Street investors and the average punter are desperate to ride a boom that is openly touted as unsustainable, even by its cheerleaders. At the sophisticated end of the market, the Bitcoin Investment Trust — a way to profit from the cryptocurrency without holding it — has reached a 62% premium to net asset value. The shares have jumped 50% in three days. At the consumer end, account openings are in the six figures. Google searches for “Bitcoin loan” or “Bitcoin credit” are rising. This isn’t about investing for the future, but getting rich now. Vanguard’s Jack Bogle is right to say that there is nothing to support Bitcoin except the Greater Fool Trade — the hope that there will always be someone in future willing to buy your asset at an even higher price. But even Bogle isn’t ruling out a doubling of Bitcoin’s price from here. He’s right there, too.

The capitulation of the sceptics has been remarkable. Anecdotal tales of regret from those who sold their bitcoins are multiplying. In discussions with experienced crypto investors, it has become simply impossible to envision a rational crash scenario, whether due to regulators, or hard forks, or a hack. That doesn’t mean the price won’t fall — more that when it does, it will be almost as inexplicable as it was on the way up.

We are beyond price charts, in other words. Bitcoin’s boom has gone further than famous market manias of the past like the tulip craze or the South Sea Bubble, and has lasted longer than the dancing epidemic that struck 16th-century France. It’s a social or anthropological phenomenon that’s reminiscent of how different tribes and cultures view the concept of money, from whale’s teeth to abstract social debts, as explored by academic David Graeber. How many other markets have spawned conceptual art about the slaying of a “bearwhale”?

Reiterating the obvious and inherent risks in cryptocurrency trading seems a fool’s errand. But again, the Bitcoin ecosystem is unregulated and open to abuse. The recent alleged hack of Tether, which briefly knocked Bitcoin’s price, has yet to be fully explained, and some worry that speculative trading using these dollar-convertible tokens is adding to the froth.

Still, the overall excitement around Bitcoin shows that it has tapped into a speculative urge, one that isn’t looking to be reassured by dividends, business plans, cash flows, or use cases. Highlighting a big, round number like $10 000 only speaks to our emotional reaction to big, round numbers. But it doesn’t explain away the risk of this one day falling to the biggest, roundest number of all — zero.

Fully agree, the bubble will burst soon. My nerves are shot, so to be on the safe side, I sold all mine today.