Bitcoin climbed to its highest since November as the debut trade of options linked to the digital currency boosted sentiment.

The world’s largest digital coin rose as much as 5.5% to just over the $8 574 level in Asia trading Tuesday, as the CME Group traded 54 options on Bitcoin futures in its debut session. The wider Bloomberg Galaxy Crypto Index tracking a basket of digital currencies climbed as much as 5% on broad-based gains among rival coins including Ether, XRP and Litecoin. 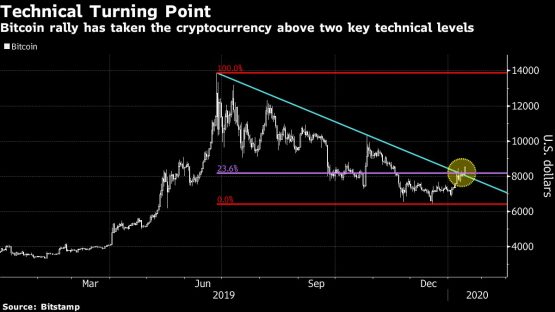 “The price was slated to move up in general and the CME launch probably added fuel to it,” said Vijay Ayyar, Singapore-based head of business development at crypto exchange Luno. “Most people think this could be the beginning of a new uptrend, especially with halving coming in May.”

The latest rally appears to be a breakout following an extended downturn going back to August. Gains will remain volatile unless Bitcoin is able to breach the $9 500 level, “which would indicate a higher high for the first time,” Ayyar said.

Bitcoin has climbed almost 20% in the first two weeks of the year, following a volatile 2019 in which early optimism from investors following the announcement of Facebook’s Libra crypto project gave way to skepticism and intense regulatory scrutiny.

The wider industry continues to work toward mainstream adoption while awaiting greater regulatory clarity in markets including the US on issues such as a Bitcoin ETF product. Meanwhile, there is widespread debate whether the upcoming “halving” — a scheduled reduction in the amount of Bitcoin produced in mining to control inflation — will serve as a fresh driver for gains.