The cryptocurrency has more than doubled in price since mid-March.
By Joanna Ossinger and Eric Lam, Bloomberg 8 May 2020  08:41 The world’s biggest cryptocurrency rallied back above $10 000 ahead of a technical event seen by some as having driven the price higher recently.

Bitcoin rose as much as 2.7% to a high of $10 070 on Friday in Asia trading, briefly taking it into five figures for the first time since February 24, and was holding just below that level at $9 974 at 10:25 a.m. in Hong Kong. That’s before the cryptocurrency’s upcoming halving, when the rewards miners receive for processing transactions will be cut in half as soon as May 12, an intentional feature of Bitcoin designed to control inflation.

“Bitcoin trades sentiment-driven at its peaks and valleys, and the post-halving hangover is part of the normal price ebbs and flows on top of Bitcoin’s fundamental value,” said Jehan Chu, managing partner with blockchain investment and advisory firm Kenetic Capital.

The cryptocurrency has more than doubled in price since mid-March, joining a wider rally in global equities since getting rocked by coronavirus-related volatility that’s depressed economic growth, consumption activity and corporate earnings. 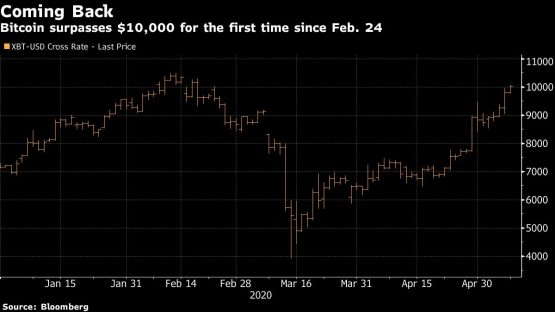 “Markets have been bullish since the March lows and this is across asset classes, including crypto,” said Vijay Ayyar, Singapore-based head of business development at crypto exchange Luno. “Money-printing by the Fed and other central banks globally have given a lot of confidence to investors that the economy will be supported no matter what.”

Paul Tudor Jones, founder and chief executive of Tudor Investment, said he bought Bitcoin as a hedge against inflation he sees being stoked by massive fiscal spending and bond-buying by central banks to combat the pandemic. Jones previously dabbled in Bitcoin in 2017, doubling his money before exiting the trade near its peak at almost $20 000.

“Bitcoin will likely see sub-$10 000 levels post-halving, but the surge in institutional interest from investors like Paul Tudor Jones is undeniable validation for Bitcoin,” Chu said.

While Bitcoin has been notoriously volatile over the years and crashed spectacularly after a peak near $20 000 in December 2017, it has also slowly been making inroads. Regulated exchanges have gradually been offering more in the way of products like futures and options around the asset and institutional interest has been building.

Cryptocurrencies still have their fair share of skeptics, from Warren Buffett to Nouriel Roubini. And data last month from PricewaterhouseCoopers LLP showed the industry struggled to attract mainstream investment last year as global fund raising and deals both dried up, including a 76% collapse in M&A value to $451 million from almost $1.9 billion the year before.

“With the Bitcoin halving fast approaching, we believe a short-term pullback is highly likely immediately post-halving, as traders begin taking profits,” said Lennard Neo, head of research at Stack AM , which provides cryptocurrency trackers and index funds. “In the longer-term, we can expect Bitcoin to register significant price appreciation toward the end of 2020 and early 2021.”

Still prefer gold!
A promise of a penny is not nearly as good as an actual penny!
In my opinion!