Corporate treasurers fed up with rock-bottom returns on their cash are about to get another pitch from the world of crypto.
By Olga Kharif, Bloomberg 31 May 2021  08:21 Corporate treasurers fed up with rock-bottom returns on their cash are about to get another pitch from the world of crypto.

Circle Internet Financial Ltd., one of the digital-asset firms behind the so-called stablecoin dubbed USDC that is pegged 1-to-1 to the dollar, has cooked up an alternative for the legions too conservative to follow the likes of Elon Musk and Jack Dorsey into Bitcoin. Park your extra cash in USDC and earn as much as 7% annually through high-yield accounts, the marketing says — more than 10 times the return on an ultra-safe 1-year Treasury bill.

The idea may be appealing to some treasurers who were initially seduced by the big gains in crypto, especially following Bitcoin’s roughly 40% decline since mid-April. Stablecoins such as USDC are gaining increased attention because of their ability to maintain their pegs during the wild crypto price swings, suggesting they could actually serve as a store of value. Even so, not all long-term digital market observers are convinced.

“If companies wish to put their corporate reserves into a stablecoin and that is fully audited, it is like putting their money in a bank account which is what they normally do,” John Griffin, professor of finance at the University of Texas at Austin, said in an email. “However, if the account is paying out a higher yield than bank account yields, then it is not merely invested in some risk-free asset.” Here’s how Circle’s program will work: Treasurers would open a “digital-dollar account” where the company’s fiat money is converted into USDC and interest is paid out in USDC. The yield is generated by Circle lending the digital dollars to a network of institutional investors that are willing to pay an interest rate for access to additional capital.

The companies would lock in their return when the account is opened, similar to a bank certificate of deposit. Circle plans to offer accounts with maturities ranging from one month to a year, with no early withdrawals allowed. Rates available will be updated on a weekly basis, depending on demand for USDC loans.

That’s a bit tamer than the strategy first highlighted last year by MicroStrategy Inc. Chief Executive Officer Michael Saylor, who advocated pouring company reserves into Bitcoin because he said the dollar is being debased by surging inflation. Musk’s February announcement that Tesla Inc. had added Bitcoin to its balance sheet helped fuel the rally that took the largest cryptocurrency to a record in April before it lost more than one-third of its value.

“Corporate reserves are not for investing in stocks, going to Vegas, or something more volatile and more rigged against you like Bitcoin,” Griffin said. 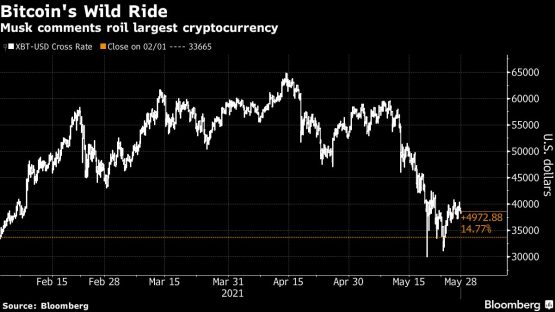 With few companies outside the crypto realm following MicroStrategy, Tesla and Dorsey’s Square Inc. into Bitcoin, Circle hopes that stablecoins may be the next logical step. The company is working with Genesis Global Capital, one of the largest crypto lenders.

The service will be first made available in the US and Switzerland, and will launch “imminently,” Jeremy Allaire, Circle’s CEO, said in an interview. Thousands of businesses are already on the waiting list, according to Circle.

“We are seeing the opportunity for the treasury use-case grow a lot,” Allaire said.

Other providers of stablecoins are rolling out similar offerings. On May 26, Gemini exchange — the brainchild of the Winklevoss brothers — said investors can earn up to 7.4% annually on Gemini dollars through a program called Gemini Earn. The Gemini token is also pegged to the dollar and its reserves are held with State Street Bank and Trust, the largest financial custodian in the world. Each month, the dollar deposit balance is examined by BPM LLP, an independent registered public accounting firm.

For these products, “appropriate users would be people who invest in junk bonds or similar risky lending,” said Aaron Brown, a crypto investor and writer for Bloomberg Opinion. “It might offer a better risk-adjusted return than alternatives. . . or not. But whatever it is, it’s not a savings account in the way most people understand that term.”

What will happen to this coin when governments introduce their own stable coins?

Please be warned that the US authorities are looking at how to something similar to what China did two weeks ago for Crypto.