Rounding out a dismal quarter for European carmakers hit by the coronavirus pandemic.
By Oliver Sachgau, Bloomberg 5 Aug 2020  10:08 BMW AG’s loss-making automotive division dragged the company into the red for the first time in more than a decade, rounding out a dismal quarter for European carmakers hit by the coronavirus pandemic.

The German manufacturer lost 666 million euros ($787 million) before interest and taxes between April and June, its first quarterly deficit since the financial crisis in 2009.

BMW’s auto business, which recorded a bigger-than-expected Ebit loss, was mainly to blame after deliveries tanked due to pandemic-related shutdowns of dealerships and factories, the company said Wednesday in a statement.

BMW is the final German manufacturer to report after what has been a difficult quarter for carmakers. VW lost 2.4 billion euros and cut its dividend, while Daimler AG argued it had weathered the worst but still needs to slash tens of thousands of jobs. 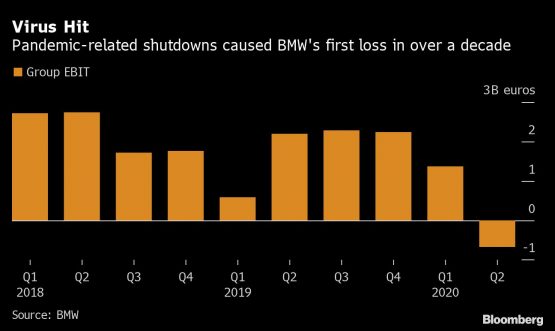 Renault SA’s alliance with Nissan Motor Co. came under strain as the Japanese partner was mostly to blame for the French carmaker’s record $8.6 billion loss.

BMW fell as much as 4.4% in early Frankfurt trading. The shares have lost more than a fifth this year.

A bright spot for BMW came from China, which started to recover from April and registered volume growth during the three months through June compared to the year earlier-period. BMW will start producing the iX3 electric car in China this year, where it will also be first sold to customers.

Deliveries of electric and hybrid cars rose in the quarter as countries including Germany and France raised subsidies for the vehicles. The company said it expects further growth from that sector in the second half of the year.

Despite the loss, BMW stuck to a prediction for an automotive Ebit margin of between 0% and 3%, after lowering it from 2% to 4% in May.

“When you see that in order to produce, you need to obtain permission from men who produce nothing – When you see that money is flowing to those who deal, not in goods, but in favors – When you see that men get richer by graft and by pull than by work, and your laws don’t protect you against them but protect them against you – When you see corruption being rewarded and honesty becoming a self-sacrifice – You may know that your society is doomed.” Ayn Rand.

Yarwell no fine – most of their losses methinks is due to the fact that these ANC Ninconpoops just don’t have the money anymore to buy these fancy BMW’s and Wabenx-zies. The ”gravytrain” – she is now empty!