Boris Johnson’s successor has three big reasons to be cheerful

The UK has three pillars supporting the economy that have left it remarkably stable.
By Andrew Atkinson and Reed Landberg, Bloomberg 1 Aug 2022  08:24 Boris Johnson leaves his successor a monumental set of problems. The UK is wrestling with an energy crisis, spiraling inflation, strikes across multiple industries, and a health system buckling under the strain of huge waiting lists.

Then there is Brexit. While Johnson hopes to be remembered as the statesman who extricated Britain from the European Union, the issue is far from closed, with a dispute over Northern Ireland threatening to trigger a trade war with Brussels.

In a series of articles over the past week, Bloomberg has examined these challenges. But it’s not all doom and gloom. The next occupant of Downing Street — who polls show is most likely to be Liz Truss — will take charge of a country with numerous advantages. Here, then, are three reasons for the incoming prime minister to be cheerful when they assume office in September.

The economy is remarkably stable

All major economies are suffering from inflation and stagnant growth — “stagflation” — and Britain is no exception. However, the UK has three pillars supporting the economy that have left it remarkably stable.

The country entered the crisis in better health than many of its G-7 peers. The UK was the only one in the group to cut its overall debt burden since 2016, and its deficit is smaller than any of the US, France and Italy. That gives the contenders seeking to replace Johnson some leeway to offer tax cuts — albeit not on the scale that Truss may like. 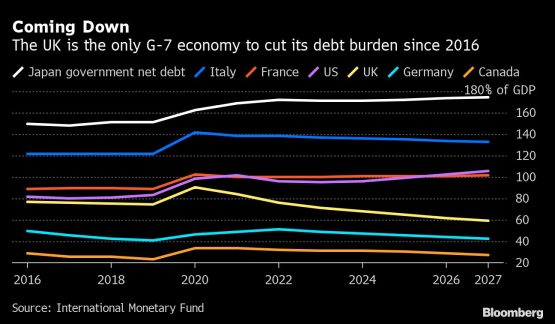 Second, the benchmark FTSE 100 index is 0.6% up this year, in contrast with the Dow Jones Industrial Average’s 10% decline and the 14% drop in the Euro Stoxx 50 Index.

Many of the biggest businesses in the UK benchmark are banks, energy companies and miners that have all benefited from rising interest rates and the elevated price of oil, gas and other commodities. It also helps that many FTSE companies earn much of their revenue overseas in dollars. (A strengthening dollar has the effect of inflating profit reported in pounds.)

Finally, British families accumulated savings during the pandemic that will help soften the blow from rising inflation. By the end of last year, households had amassed more than £190 billion of excess cash. This money isn’t equally spread among households — some families are facing serious hardship — but it does mean that many have a useful buffer as inflation bites. London’s £500 billion economy suffered less than other regions in the early stage of the pandemic and has subsequently recovered more strongly. The capital’s GDP is now back above its pre-pandemic level, an achievement shared only with Northern Ireland. What’s more, life in London appears to be improving. More office workers have adopted remote working than in other cities, taking the edge off rush-hour unpleasantness and giving families a better work-life balance. Traveling across the city has also been boosted by the opening of the Elizabeth Line. Young adults have a greater chance of getting on the property ladder after the price of flats fell 11%, and in terms of general living costs, London could be far worse — a recent survey by Mercer said it was only the 18th most expensive city in the world.

The City of London, meanwhile, has retained its status as one of the world’s leading financial hubs. It is Europe’s most attractive destination for foreign direct investment into financial services, according to EY. It remained top of Schroders’ Global Cities Index this year and was second only to New York in Z/Yen’s Global Financial Centres Index.

The pound in your pocket

The shortage of labor is at its worst in living memory and prices are rising at the fastest rate in 40 years. That’s giving employers a headache — but has also proved a boon for wages.

At any other time, the pay increases being offered to some employees would be jaw-dropping. In finance, the median salary has jumped by 10% over the past year — more than matching the pace of inflation. Pay growth in construction and business services such as accountancy isn’t far behind.

Workers willing to jump ship command the biggest pay bumps, and prospects for graduates are the best they have been for years. Job search site Adzuna estimates that university leavers entering the job market this year can expect 7% more for doing the same job than in 2021. The number of vacancies has spiked 59% as employers look to graduates to meet their staffing requirements. For the first time ever, there are now more job vacancies than unemployed people available to fill them, tipping the balance of power in the jobs market. Companies have been ramping up welcome bonuses, pay levels and all manner of perks in a bid to attract staff. A loss of foreign workers, long-term sickness and an increase in the number of people taking early retirement mean the workforce is now smaller than it was before the pandemic. However, there are signs that the squeeze may be easing. In the three months through May, the number of people neither in work nor looking for a job fell by almost 150,000 and employment surged. That suggests the cost-of-living crisis is convincing people to return to work. If the trend continues, the Bank of England may start to worry less about the tightness in the labor market pushing up inflation. Johnson’s successor is still likely to face a painful winter as millions of people battle a once-in-a-generation cost-of-living crisis. But many of the factors behind the crunch are international in nature and likely to ease off in time. This time next year, Downing Street’s next incumbent may be looking at a very different economic picture.