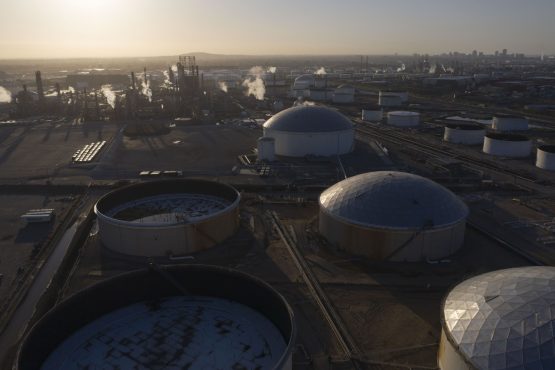 Oil rose in tandem with equities while there also were signs that the surge in coronavirus cases in the southern US is slowing.

Brent futures in London topped $45 a barrel, heading for their strongest close in five months. The number of Americans hospitalised due to Covid-19 fell below 50,000 for the first time in a month as a spike in the Sun Belt eased, while Russia said it had registered the world’s first vaccine. There was also support from equity markets, which climbed globally, and a weaker dollar. Crude has been largely stuck in a range since early June and has struggled to break far beyond $45 a barrel in London. With OPEC+ returning barrels and uncertainty over the impact of the virus on the market’s demand recovery in the coming months, trading volumes have largely dried up in recent weeks.

“The oil price keeps ticking higher and there is no sign yet of an increase in drilling rig count and a revival in shale oil activity,” said Bjarne Schieldrop, chief commodities analyst at SEB AB. “The overall picture now is that OPEC+ continues to control its supply, constraining it though letting a little bit more out in the market in August.”

Contrasting pictures of market health are also emerging across the globe. In Europe, contracts linked to the value of Russia’s flagship Urals crude were at their weakest since May on Monday. Meanwhile crude in Texas’s Permian basin was at its strongest level in three weeks.

The strength in parts of the US comes as analysts forecast a third straight drop in American crude stockpiles, when government data are released Wednesday. The coming days will also see the release of monthly reports from the Organisation of Petroleum Exporting Countries, the International Energy Agency and the US Energy Information Administration.

But wait, the second wave is coming.