Central banks around the world continue to boost interest rates to counter a surge in inflation.
16 May 2022  07:39 Prospects for the world economy are growing bleaker as Russia’s war in Ukraine takes a toll on European businesses and consumers, China employs a heavy-handed approach toward Covid-19 and US financial conditions tighten, according to the Institute of International Finance.

Central banks around the world continue to boost interest rates to counter a surge in inflation. In the US, the closely watched consumer price index showed inflation remains well-elevated. The squeeze to household budgets is also being felt in the UK and France. 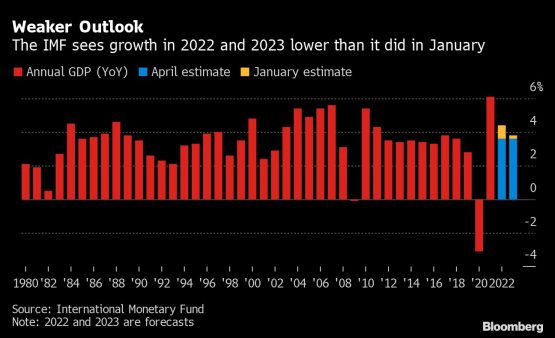 The world economy will essentially flatline this year as Europe falls into recession, China slows sharply and US financial conditions tighten significantly, according to a new forecast from the IIF, which counts more than 450 financial-services firms as members. The group forecasts 2.2% global GDP growth this year, markedly lower than the International Monetary Fund estimate of 3.6% on a purchasing power parity basis. The gasoline market is starting to run out of control — just like diesel before it. US buyers are already sucking in more supplies from Europe as the summer driving season — which increases demand — gets underway. Add to that a loss of so-called secondary feedstocks from Russia that are critical in the production of the road fuel. Americans got little respite from inflation in April, as prices for a range of necessities and discretionary-spending categories continued to climb at some of the fastest-ever rates. While annual measures of consumer prices cooled slightly from March — signaling a peak that economists expected — the details painted a more troubling picture as monthly figures advanced more than forecast. US homebuyers are increasingly turning to adjustable-rate mortgages as overall borrowing costs soar. ARMs — which carry variable interest rates that reset based on the market at predetermined times — accounted for 10.8% of total home-loan applications last week. That’s up from 3.1% of activity at the start of the year and is the largest share since 2008. 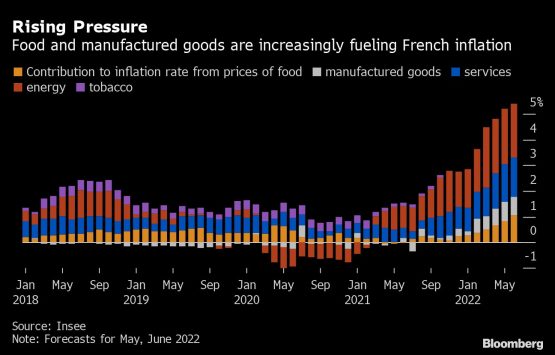 The French government pledged to increase social benefits and issue food vouchers to the poorest households as freshly re-elected President Emmanuel Macron seeks to avert panic over a cost-of-living crisis before legislative elections next month. The UK economy unexpectedly contracted in March as the cost of living squeeze forced consumers to cut back on spending, throwing doubt on the Bank of England’s ability to keep hiking interest rates and piling pressure on Prime Minister Boris Johnson’s government to respond. For many of Sweden’s highly indebted consumers, the Riksbank’s sudden interest-rate increase at the end of April marks the start of a new squeeze that officials have long fretted about. 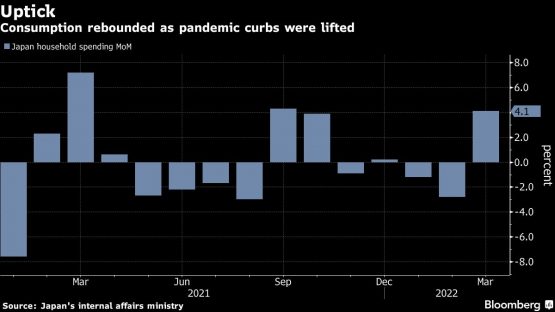 Japan’s household spending climbed in March for the first time in three months as virus restrictions were lifted across the nation, offering some support for private consumption at the end of a bruising quarter for the economy. Malaysia’s central bank unexpectedly raised its benchmark interest rate in an effort to head off price pressures, while authorities in Argentina boosted borrowing costs for the fifth time this year. 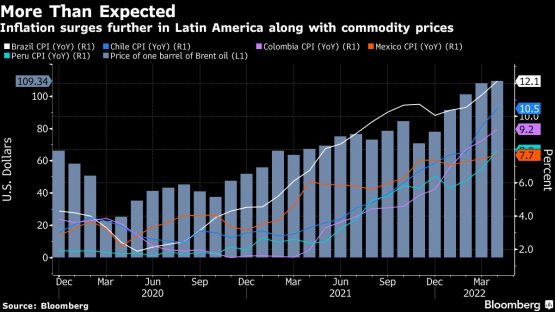 Latin American central banks will likely extend their monetary tightening campaigns beyond what was originally expected after inflation surged past forecasts in April, with steep increases in food and fuel costs stinging policy makers. 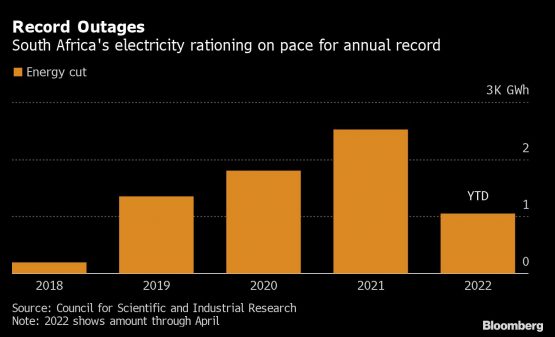 South Africa is headed for a record year of power cuts if the rate of station breakdowns fails to improve, particularly at coal-fueled plants. Africa’s most industrialized nation was already on track to exceed the annual record for energy shed from controlled blackouts, a practice locally known as loadshedding that’s used to prevent the grid from a total collapse.