Chinese state-backed funds intervened in the stock market on Tuesday, helping the benchmark index stage a strong recovery from its biggest intraday drop since August 2021.

The CSI 300 Index ended down just 0.6% at the close, paring an earlier slump of 2.4%. State-related funds entered the market to buy local shares in the afternoon session, according to two people with direct knowledge of the matter, who declined to be identified because the matter is private.

The move by state funds was intended to slow the pace of declines, one of the people said. Financial shares including brokerages were among those to have been purchased, the person said. Sub-gauges of cyclical sectors such as energy, utilities and financials posted gains in Tuesday’s session even as the benchmark ended lower.

The people didn’t provide information on the amount purchased or the frequency of such buying. The China Securities Regulatory Commission didn’t reply to a fax seeking comment.

Support from state funds, known as China’s “national team,” came as mainland’s benchmark gauge looked set to erase its advance from Monday, when local markets reopened following the weeklong Lunar New Year holiday. The index plunged into a bear market before the break as worries about a weak economy and the property sector’s debt woes outweighed Beijing’s monetary easing, and efforts from the securities regulator, state media and mutual funds failed to lift sentiment. 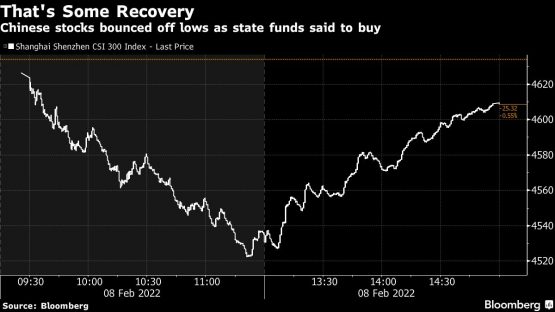 Historically, Beijing has supported markets when needed around significant events or dates. The funds stepped in to stem a market rout during the National People’s Congress in March last year.

Stocks on the mainland have had a weak start to 2022 as the monetary policy divergence between Beijing and Washington — touted as one key reason for global brokerages to recently turn bullish on Chinese shares — has yet to lead to any meaningful gains. Even last month’s cut to a key interest rate failed to excite local traders, with the CSI 300 down 6.7% so far this year.

The gauge’s slump earlier Tuesday was driven by concerns over consumer spending as economic trends during the festive break — typically a boon for spending and travel — disappointed investors. While Chinese people traveled more versus last year, the pandemic and restrictions to control outbreaks hurt domestic tourism spending, which fell from 2021’s already low level.

Consumer spending needs to pick up for China to start to “perform pretty well against the rest of the world,” Sean Taylor, Asia Pacific chief investment officer at DWS, said on Bloomberg Television. For now, people will want to move past Olympics and seek more guidance from the government about stimulus, he added.

Local traders have followed global peers in dumping expensive stocks as bond yields rise. The tech-heavy ChiNext Index ended 2.5% lower, taking its losses from an August peak to 20% and pushing it into bear-market territory.

Sino-American tensions could also add to bearish sentiment as the U.S. is said to be losing patience with China after the nation failed to meet its purchase comments under their trade agreement. Separately, the U.S. Department of Commerce added 33 entities in China, including Wuxi Biologics Cayman Inc., to its unverified list. That drove a group of healthcare stocks to its lowest level in nearly two years.

“The market is simply seeking the path of least resistance as the gains last year in renewables mean there is plenty of reason to sell,” said Wu Xian Feng, fund manager at Shenzhen Longteng Assets Management Co. “The plunge in ChiNext today is chiefly due to the major players catching up with losses in the rest of the sector.”

No different to the US Fed propping up the market by printing dollars. But where will it all end? Maybe cryptocurrencies aren’t such a laugh after all? I’m up 21.52% over a couple of weeks after a bit of a punt…

NFT’s a myriad of trading derivatives, crypto’s … everything is going virtual – except the food at Woollies.