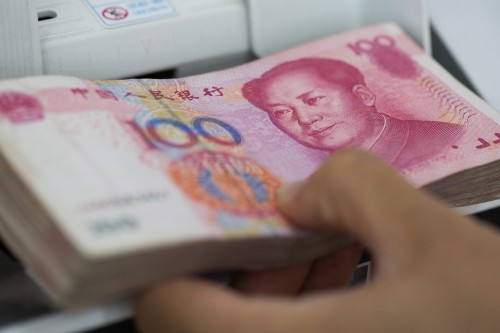 SHANGHAI – Chinese stocks dropped by almost 4 percent on Tuesday, denting hopes that a slew of regulatory measures issued by Beijing over the past three months had brought some stability to the market.

Concerns about the Chinese economy mean stocks are down 6 percent so far this week, with the drop exacerbated by thin trading volumes as many investors opt to stay on the sidelines.

China’s benchmark CSI300 index of the biggest listed stocks in Shanghai and Shenzhen closed down nearly 4 percent on Tuesday, while the Shanghai Composite Index dropped 3.55 percent to end at 3,004, just above the psychologically important 3,000 mark.

The fall will be of dismay to Chinese policymakers trying to halt the market slide, given that up until this week trade in September had been relatively steady compared with the previous two tumultuous months.

Chinese equity markets have dropped around 40 percent since mid-June despite frantic attempts by the authorities to curb speculation and pressure state-owned institutions to buy up stocks.

However, persistent doubts that China’s economic growth this year will meet the government’s official forecast of 7 percent are deterring many investors from re-entering the market.

Some retail investors who spoke to Reuters said they are waiting for the Shanghai Composite index to go down to 2,500 before they start buying again.

Small cap stocks have posted even larger falls, with the CSI300 IT index down 7.4 percent on Tuesday and Shenzhen’s growth board ChiNext 5.3 percent lower.

“With a slim chance of making a profit in this market, money is not coming in,” said Zhou Lin, analyst at Huatai Securities.

Investors’ hesitation comes despite Beijing’s attempts to revive slowing economic growth by ramping up government spending. Data on Tuesday showed fiscal expenditure in August was 25.9 percent higher than a year ago.

The spending increase to 1.28 trillion yuan ($201 billion) was the biggest percentage rise in central and local government fiscal expenditure since April, when it leapt 33 percent, figures from the Ministry of Finance showed.

With traditional monetary policy responses such as interest rate cuts having less impact in reviving economic activity than in the past, China is trying to increase fiscal stimulus to shore up short-term growth and fend off growing deflationary pressures.

Reuters reported exclusively on Monday that Chinese authorities had seized 1 trillion yuan ($157 billion) from local governments in unused budget allocations. Sources said the funds would be used to pay for investments.

Data in the past week has pointed to a further cooling in the Chinese economy in August, adding to expectations GDP growth in the July-September quarter would be below 7 percent.

In the latest evidence of the impact of the economic slowdown, Volkswagen and other major carmakers in China have started to rein in production, wages and costs, industry sources said.

“China’s economy has recently slowed, with (weakness seen) mainly in the manufacturing sector. But it is expected to grow stably with support from the authorities’ fiscal and monetary measures,” he said at a news conference following the BOJ’s decision to leave its monetary policy unchanged. ($1=6.3692 yuan)