Image: SeongJoon Cho/Bloomberg
China’s debt is bouncing back after the worst global outflows on record as investors refocus on the country’s growing divergence with the rest of the world on monetary policy.

While the country’s bonds tumbled as Russia’s war with Ukraine sparked a broad pullback in risk, the securities have quickly pared those losses and are now among the top five best-performing emerging debt markets since the invasion, data compiled by Bloomberg show.

Money managers are reigniting bets that the People’s Bank of China will ease within days even as the U.S. began raising rates for the first time since 2018 last week — a split that’s set to boost Chinese bonds and broad developing-nation indexes, in which China can account for more than 50% of securities.

The prompt behind the quick turnaround?

A worsening Covid outbreak that’s spurred region-wide lockdowns and threatens to further hurt the economy. Investors are also seeking safer assets after a domestic stock rout that only halted when officials promised to ease a regulatory crackdown and pledged support for technology and property companies. Meanwhile, U.S. Treasuries — usually the haven of choice to weather all forms of uncertainty, including war — are getting hammered.

“We expect China government bonds to outperform global bonds” as monetary easing is likely needed to stabilize growth in the face of associated lockdowns, said Wilfred Wee, a Singapore-based portfolio manager at Ninety One Singapore Ltd. “It is striking how differently yuan government bonds have been behaving relative to global bonds, reflecting their portfolio diversification ability.” 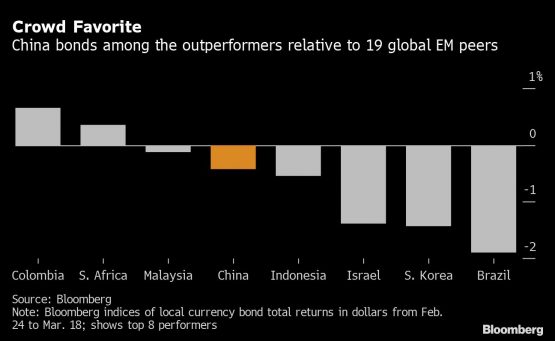 China is expected to continue easing, with a median of economists surveyed by Bloomberg expecting the reserve requirement ratio to be cut by another 50 basis points to 10.5% by the first quarter of next year, after a 50-basis-point cut in this quarter from the current 11.5%.

By contrast, the Federal Reserve hiked 25 basis points last week, with the benchmark rate projected to end 2022 at about 1.90%. Policy rates in Poland, Hungary, the Czech Republic, Brazil and Chile are already above pre-pandemic levels, with elevated energy prices threatening to push benchmark rates even higher. Even policy makers in Southeast Asia, the final bastion of record low rates, are expected to start hiking rates this year.

China is on a different path, with slower-than-expected credit expansion in February and falling home prices imperiling the nation’s commitment to achieve 5.5% annual growth. A fresh outbreak of Covid is only going to make that harder, already prompting the country to make a push to weaken the yuan through currency fixings.

Citigroup Inc. remains overweight on China bonds amid growth concerns. “The attraction of a dovish central bank at a time when almost all other central banks are hawkish will keep interest in China government bonds high,” Citi strategists including Dirk Willer wrote in a report last week.

While officials in Shanghai have ruled out imposing a broad lockdown for the time being, lockdowns have been announced in Shenzhen and Langfang, a city near Beijing’s new airport. Apple Inc. supplier Foxconn had to initially halt operations at its Shenzhen sites, but restrictions were slightly eased on Friday in the technology hub. China’s bonds “should be anchored given the outlook for growth and PBOC’s continued predilection to ease further,” said Edwin Gutierrez, head of emerging market sovereign debt at abrdn in London.

China bonds have registered losses of 0.4% since the escalation of Ukraine tensions on Feb. 24, while a gauge of 19 emerging-market peers that comprise the Bloomberg EM local currency government bond index has tumbled 2.9% over the same period. The asset class has proven resilient despite the immense swings in the wider market, with a volatility index for U.S. Treasuries and developing-market currencies surging to levels last seen during the peak of the pandemic in March 2020.

That has strategists looking for the record foreign outflows in February to reverse. Some of that selling may have come from the Bank of Russia repatriating funds after U.S. sanctions blocked access to its foreign reserves.

“We do not expect the bond outflows to persist, and see inflows returning in two to three months time,” according to Becky Liu, head of China macro strategy at Standard Chartered Plc in Hong Kong.

Here’s what to watch in emerging markets this week: