As a flurry of government measures to stem an equity rout started to take effect.
By Bloomberg News 10 Jul 2015  05:34 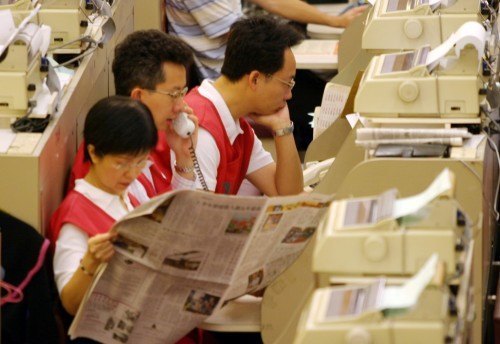 Chinese stocks rallied, sending the benchmark index toward its biggest two-day jump since 2008, as a flurry of government measures to stem an equity rout started to take effect.

The Shanghai Composite Index climbed 5.2% to 3,900.20 at 10:14 a.m., adding to Thursday’s 5.8% surge, as health-care, industrial and consumer companies advanced. Only two stocks fell on the benchmark gauge with about 49% of companies on mainland exchanges still halted from trading on Friday, down slightly from the previous day.

Officials have unveiled market-boosting measures almost every night over the past two weeks to shore up a stock market that lost $3.9 trillion in less than a month. Some of the biggest fund managers are getting bullish, with Fidelity Investments, which oversees the largest China funds outside of the mainland, saying that Chinese stocks are now a buy.

“The worst is over and that should be the end of the correction now, thanks to all these government support measures,” said Zhang Haidong, chief strategist at Jinkuang Investment Management in Shanghai. “The market is probably at the bottom in the medium term as the economic scenario and the loose monetary policies remain unchanged.”

While the median price-to-earnings ratio in China has dropped to 53 from 108 at the height of the rally, valuations are more than twice as high as those on the Standard & Poor’s 500 Index.

Currently 1,422 companies on the mainland’s exchanges are suspended from trading, down from 1,439 at the close of trade Thursday. Trading halts are equivalent to 49% of total listings, compared with 50% on Thursday.

In the latest effort to stem losses, the securities regulator suspended reviews of initial public offerings and other share sales, people familiar with the matter said, This week, regulators banned major stockholders from selling stakes in listed companies and announced that banks can roll over loans backed by shares.

Fidelity is echoing the bullish call from Goldman Sachs Group Inc., saying the four-week rout has limited impact on earnings and economic growth. Government efforts to stabilize the market will keep the rout from spilling over to the broader financial system, Robert Bao, a Hong Kong-based money manager at Fidelity said in a telephone interview.

The stock plunge will trim at least 0.1%age point from third quarter gross domestic product growth and may prompt the Central Bank to accelerate monetary easing, according to a majority of economists surveyed by Bloomberg from July 8-9.

Margin traders reduced holdings of shares purchased with borrowed money for a 14th day on Thursday, with the outstanding balance of margin debt on the Shanghai Stock Exchange falling by 1.4% from a day earlier to 927.8 billion yuan. A five- fold surge in margin debt over the 12 months through June 12 had helped propel the Shanghai index to a more than 150% gain.

The largest U.S. exchange-traded fund tracking mainland China stocks surged 20% on Thursday, rebounding from a record drop. The Deutsche X-trackers Harvest CSI 300 China A- Shares ETF jumped to $40.69 in New York, the most since it began trading in November 2013. The advance is double the 10% exchange limit mainland stocks can gain in a single day and compares with a 6.4% gain in the fund’s underlying index.