Christmas comes early for markets as key risks get taken out It started last Friday, with a blowout US jobs report that beat all expectations. Then in quick succession late Thursday investors got news that the guns will be holstered in the US-China trade war, and that Britain is lifting itself out of the quagmire of a hung parliament.

Suddenly, all the worries about a global recession, yet another wave of tariff hikes between the world’s two largest economies and a messy UK breakup with the European Union are fading from view. It may be Friday the 13th, but those who made an early start on JPMorgan Chase & Co’s call for risk-on trades in 2020 can count themselves lucky. The S&P 500 Index and Nasdaq Composite logged record closes Thursday, helping push MSCI’s all-country world gauge to its first all-time high since the eve of the global rout in January 2018, back when a stocks “melt-up” was the narrative of the day. In currencies, the yen fell and the yuan soared. Bond yields climbed, with 10-year Treasuries north of 1.9% and their Japanese counterparts in recent days straddling 0% for the first time since March.

The moves came on news that President Donald Trump signed off on a phase-one deal with China that averts the Dec. 15 introduction of another wave of US tariffs. Confirmation from Trump himself is still pending, though, and US futures saw only modest gains in the Asian morning Friday. In the UK, Prime Minister Boris Johnson is cruising for a majority, exit polls showed, an election result that should guarantee passage of his Brexit deal with the EU.

“We’ve got a runway now for a smooth way into year-end,” said Chris Weston, head of research at Pepperstone Group in Melbourne. “You’re looking at a situation where investors are going to have to chase the market into year-end.”

In a stark contrast to last year, the Federal Reserve has been a major ally for those bullish on risk this year-end. The US central bank started injecting liquidity in October at a pace of $60 billion of T-bill purchases a month, and Chairman Jerome Powell said Wednesday if needed the initiative could adjust to buying coupon-paying securities as well.

Bets on the Fed have shifted as risks eased over the past week. Futures trading suggests just a 69% chance of an interest-rate cut in 2020. Thursday last week, one cut was fully priced in, with a 13% chance of another one by the end of next year.

The ground is shifting for others, too. As recently as a month back, the Bank of Japan was seen by some as needing to head deeper into negative territory with its policy rate. But now, with the yen weakening past 109 per dollar and Japan’s government embracing a fiscal-stimulus package, things look different.

“We’re perhaps seeing the start of a strong yen decline — Trump’s tweet, the Brexit results have flipped the yen on its head,” said Vishnu Varathan, head of economics & strategy at Mizuho Bank Ltd. in Singapore. “We could see haven demand wane into 2020. There might be even a last hurrah before the year-end as risk bulls get their way, and push the yen lower from here.” 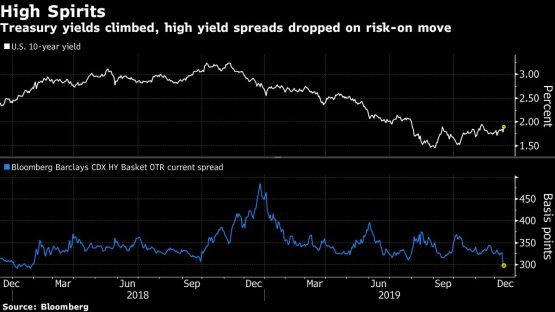 Bringing hope to both Japanese institutional investors and those the world over is the reduction in the pool of negative-yielding bonds. It had shrunk to $11.5 trillion as of Thursday, down from the record $17 trillion hit in August when the trade war was raging.

How long the Christmastime cheer will last remains a question. On three of the key risks, doubts remain. Brave is the analyst that predicts smooth sailing in the US-China relationship ahead; no American presidential candidate is running on the “be nice to China” ticket. Johnson’s looming majority may guarantee the UK leaves the EU in January, but the two will still need to negotiate a trade deal, meaning the “hard Brexit” scenario could yet be on the horizon.

As for global recession risks, while the consensus is that growth will pick up in 2020 thanks to this year’s monetary easing and moves in a number of countries to embrace fiscal stimulus, that view isn’t universal. In Australia, an economy closely tied to demand for important inputs including coal and iron, some even see the central bank adopting quantitative easing next year.

And some warn that the US presidential-election season, set to kick into high gear next month in the leadup to the February 3 Iowa caucuses, could pose dangers. The populist platform from onetime front-runner Senator Elizabeth Warren has triggered warnings about the record-setting US bull market for equities coming to an end.

But for the moment, things are looking up. Investors have shrugged off the Trump impeachment story, confident that the Republican majority in the Senate means he’ll remain in office. The Republicans and Democrats have even been able to craft a bipartisan deal to fund the government before the December 20 spending deadline. For emerging markets, a newly solid Chinese yuan and a retreat in the dollar to the weakest since July offers encouragement. A weakening yuan that dragged developing nations’ currencies down with it had made dollar debt more expensive to service. The yuan Friday traded past the 7-per-dollar line that had briefly spooked markets earlier this year.

“It feels like all the bricks in the wall of worry are falling at once,” said Peter Atwater, president of Financial Insyghts.