Coke is through worst quarter, says it gets better from here Coca-Cola Co. investors breathed a sigh of relief Tuesday as the soda maker whose major amusement-park and stadium customers were on lockdowns during much of the second quarter confirmed it has made it through the worst.

“There are some unknowns ahead of us, some markets regressing, but I think on an overall basis, we will see the next six to nine months improving around the world,” Chief Financial Officer John Murphy said in a phone interview. Chief Executive Officer James Quincey said the second quarter will likely “prove to be the most challenging of the year.”

In fact, the incremental improvement has already started. After falling 25% in April from last year’s levels, global unit case volume was down just 10% in June and is only showing a mid-single-digit decline so far in July. That return to near-normalcy comes as more consumers globally emerge from their homes to enjoy entertainment — and order Cokes. 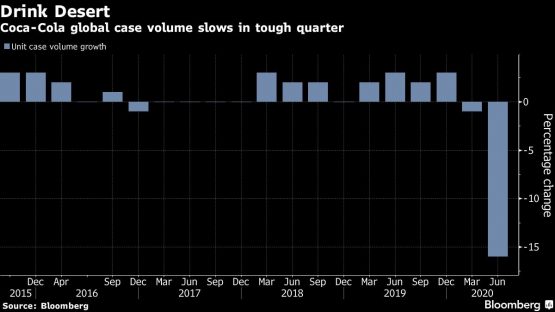 Coca-Cola’s share prices rose, climbing as much as 3.9%, the biggest intraday gain in nearly two months. The shares were down 17% this year through Monday.

Still, while the company says it seems the second quarter will be “the most severely impacted” of the year, it’s not sure it’s out of the woods yet, especially as Covid-19 cases surge in parts of the US and around the world. On the company’s earnings call, Quincey said he expects the global economy to take two to three years to recover.

Coronavirus cases in the US increased 1.3% on Monday as compared with the same time Sunday to 3.79 million, according to data collected by Johns Hopkins University and Bloomberg News.

“Here in the US, we’re seeing some erratic moves around different states,” Murphy said.

It’s also unclear when Coke consumption will return to normal at restaurants and theme parks as regulations continue to shift. Even major Coca-Cola customer Walt Disney World is still trying to figure it all out, prohibiting this week eating and drinking while walking in a bid to ensure mask use inside the park.

“Given the ongoing uncertainty surrounding the coronavirus pandemic and levels of lockdown, the ultimate impact on full-year 2020 results is unknown,” Coke said. “The company’s balance sheet remains strong, and the company is confident in its liquidity position as it continues to navigate through the crisis.”

I think the problem for Coke in SA is quite simple: If you can’t buy Klippies, who needs Coke?