Cryptos no refuge in market carnage as bitcoin breaks $8 000 Cryptocurrencies are not immune to the gyrations rocking global markets, plunging along with a broad range of assets on Monday in the wake of the collapse in crude oil prices.

Bitcoin, the largest digital currency, dropped as much as 16.4% from Friday’s close after extending a sell-off begun over the weekend, and was trading at around $7,726 as of 1:49 p.m. in New York. That’s the biggest one-day slump February 2018, according to consolidated pricing compiled by Bloomberg.

The wider Bloomberg Galaxy Crypto Index fell as much as 20% as major cryptocurrencies Ether, XRP, Dash and Litecoin also retreated. 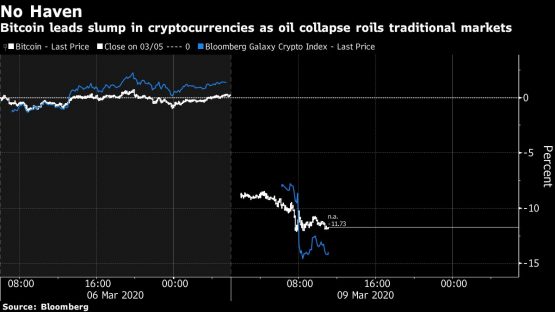 Arguments that cryptocurrencies act as a place of shelter during turmoil have diminished in recent days amid an intense bout of equity market selling.

“We look at the broader market and liquidity event that is being observed as the primary driver for the sell-off,” said Denis Vinokourov, head of research at Bequant, a London-based digital asset firm. “In times of stress, cash is king and even safe-haven assets can fall in price.” 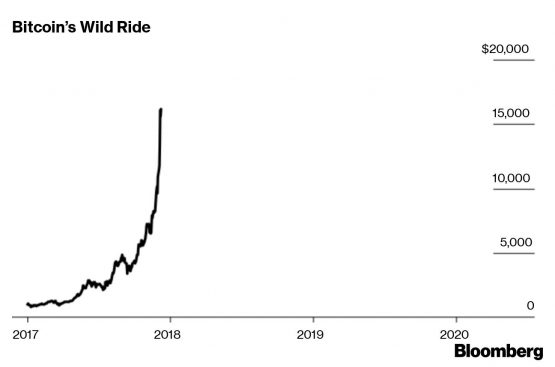 Asia equities plunged with sovereign bond yields, while currencies swung wildly on Monday after Brent oil prices crashed more than 30%, the second-largest decline on record after the plunge during the Gulf War in 1991. US stocks slid more than 5%, whipsawing from an earlier loss that topped 7% and that triggered a trading halt.

“Macro dominoes are falling to create a chain of negative sentiment, which is in turn triggering a sell-off of crypto,” said Jehan Chu, managing partner with blockchain investment and advisory firm Kenetic Capital. “Bitcoin has always been subject to short-term sometimes-violent volatility, but today’s drop is nothing we haven’t seen before” and it could move lower still, he said.

There’s also a bullish argument, according to Chu — that the weakness in the global economy, oil’s collapse and the coronavirus outbreak are helping to make the case for investing in digital assets.

Even with the latest sell-off, Bitcoin is still up about 8% this year, with much debate within the industry on the potential impact on pricing of the upcoming “halvening” — a scheduled reduction in the mining rate of the coin designed to combat inflation.

“A similarly rapid turnaround and appreciation is equally anticipated on the way to higher levels leading into the halvening,” he said.