The guest list is hundreds of names shorter, with many titans of finance conspicuously absent.
By Anders Melin, Bloomberg 23 May 2022  11:11

Ask some of the world’s rich and powerful descending on Davos this week and they’ll tell you: After a two-year pandemic-enforced hiatus from the Swiss ski resort, the annual meeting of the World Economic Forum just isn’t going to be the same.

The guest list is hundreds of names shorter, with many titans of finance conspicuously absent. The chiefs of Goldman Sachs Group Inc. and JPMorgan Chase & Co. aren’t going. Neither is BlackRock Inc.’s Larry Fink or Steve Schwarzman, the private-equity billionaire.

Also missing is the usual contingent of superwealthy Russian tycoons — several who attended in 2020 are now sanctioned — and many of their Chinese counterparts. 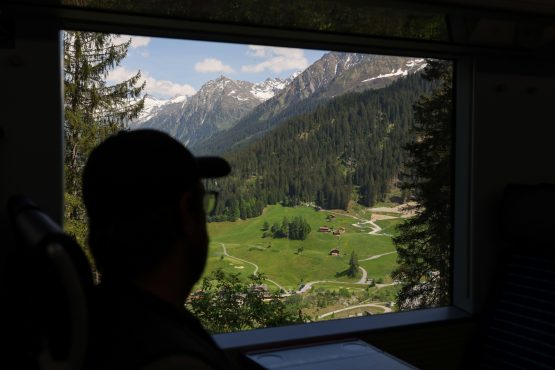 The countryside from a SBB AG train window on its way to the town of Davos, May 21.

Even the timing and weather are off: Instead of the usual snow and crisp January air, the forecast for the May Davos is rain. (The WEF included umbrellas rather than crampons in the welcome pack for delegates.)

The lingering pandemic, rampant inflation, tumbling stock markets and the war in Ukraine mark a bleak backdrop for the five-day event. Looming over it all is this year’s theme, which has an ominous ring: “History at a Turning Point.”

“I just don’t think the excitement is there,” said Wendy Craft, chief of staff at Fulcrum Equities, a New York-based family office. “The markets, war and the virus certainly don’t help.”

The event still expects to draw some 2 000 attendees, not counting the scores of other people who come but don’t go to official events. Citigroup Inc.’s Jane Fraser and Bank of America Corp.’s Brian Moynihan will be there.

So too will roughly 90 billionaires tracked by the Bloomberg Billionaires Index. That includes philanthropists Bill Gates and George Soros, hedge fund mogul Ray Dalio, and India’s Gautam Adani, whose personal fortune has skyrocketed this year, making him the world’s sixth-richest person. A banner reading “A very warm welcome” ahead of the World Economic Forum (WEF) in Davos, May 22.

By comparison, at least 119 billionaires converged on the town in January 2020, just as the coronavirus outbreak began. That included Jamie Dimon, who this time around is staying in New York for a big JPMorgan investor day. Goldman is sending a handful of top bosses, but not David Solomon, its chief executive officer.

While about 50 heads of state or government are slated to come, German Chancellor Olaf Scholz is the only Group of Seven leader.

And while President Donald Trump grabbed the spotlight in 2020, the US delegation this year will be led by Commerce Secretary Gina Raimondo. The most senior Chinese official is Xie Zhenhua, the special envoy for climate change.

Man of the moment, Ukranian President Volodymyr Zelenskiy, will address the gathering from war-torn Kyiv on Monday.

Once guests have attended a series of panels they can, as usual, climb the 33 stone steps to the Steigenberger Grandhotel Belvedere for closed-door confabs. They will have fewer parties to choose from in the evenings. JPMorgan, for instance, won’t be hosting its traditional event in a local art gallery.

Many of those attending this year are nevertheless thrilled about a return to normalcy: the meetings, the handshakes, the sipping on a Monsteiner, the local beer made at Europe’s highest-altitude brewery, at the Piano Bar. David Spreng, the founder of venture debt lender Runway Growth Capital, said he elected to forgo his entrance pass to the meeting itself this year and plans to just go to offsite events, including some he helped organise.

“I found that I can accomplish my new goals without a white badge,” Spreng said.

The biggest difference of all might just be the weather.

As one Wall Street executive recently quipped to an associate: Davos just isn’t Davos without the snow.