Deaths data shows 80% of South Africans may have had Covid

This is high by global standards and could push the country close to so-called herd immunity.
By Antony Sguazzin, Bloomberg 18 Aug 2021  17:34 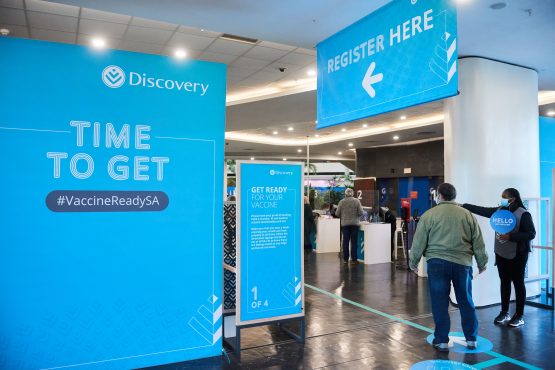 It is however possible that the delta variant of the virus could reinfect those who contracted other strains. Image: Waldo Swiegers/Bloomberg

As many as four out of five South Africans may have contracted the coronavirus, indicating that the country may be one of the world’s hardest-hit nations by the disease, the chief actuary at Africa’s biggest health insurer said.

Emile Stipp, the actuary at Discovery Health, based his calculations on the country’s case-fatality rate and excess deaths, a measure of the number of fatalities compared with an historical average. They are thought to provide a more accurate picture of the impact of the pandemic than the official toll.

“If we know the mortality rate of Covid, we can deduce the likely infection level,” Stipp said in an emailed response to questions. Residents wait in line to register at a Discovery mass vaccination site in the Midrand district of Johannesburg, South Africa, on Thursday, July 8, 2021. A third wave of coronavirus cases in South Africas commercial hub of Gauteng may have peaked after daily infections surged to a record last week.

The infection rate of between 70% and 80%, as estimated by Stipp, is high by global standards and could push South Africa close to so-called herd immunity, estimated at between 80% and 90% by the Infectious Diseases Society of America. Still, it’s possible that the delta variant of the virus could reinfect those who contracted other strains.

In England only 18% of blood donors had antibodies showing prior infection, Public Health England said in an August 12 report. That number jumped to 97% when those with antibodies from vaccinations were included. About 61% of England’s population is fully inoculated, compared with 7.1% in South Africa.

Stipp said he based his assessment on the assumption that 90% of excess deaths reported by the South African Medical Research Council were due to Covid-19. The SAMRC estimates South Africa’s excess death number at 238,949 during the pandemic, compared with an official Covid-19 death toll of 78 377. The country’s case fatality rate is 3%.

South Africa has the highest number of infections, with over 2.6 million confirmed, and deaths in Africa. It also has the most widespread testing and monitoring of cause of death.

In a May 13 presentation to Satsa, a tourism body, Stipp estimated that 62.1% of South African had contracted the virus — a number he’s since revised.

The Eastern Cape, where 91.1% of the population was thought to have been infected, was the worst-hit province, and Gauteng, at 43.4%, and North West, at 35%, the least-affected. The latter two provinces have posted record pandemic-era excess deaths in the country’s third wave of infections, which is yet to fully subside.

Surveys of blood donors in January and May put South Africa’s overall prior infection rate at 42.8%.

This is a great news! A bittersweet silver-lining after all this.

But this inconvenient truth is going to hurt the profit-motive of Pfizer who want to vaccinate every man, woman and child. I’m surprised this article was published, and i expect it to be loudly disputed or ignored by the laptop-class who want to work from home until ever citizen is vaccinated, and the political-class who want to maintain SA in a state of disaster indefinitely.

The problem with surveys is the population size. And Actuaries are good at making assumptions that often do not relate to the reality. That said, I agree with the overall theme that far more people j have been infected with the virus and survived than the testing suggests.

How many people have been ill but didn’t bother getting tested? I was sick for a week, couldn’t exercise for 2 months, isolated myself, but didn’t get tested. Am sure there are lots like me. So need immunity may well be closer than we think.

Ya, had to travel so went for a PCR test and thought I would pay the R150.00 to check for Antibodies and the result was positive. You right there must be plenty people in the same situation, so the 80% could well be close.

We owe the herd immunity to the taxi industry. Give thanks for their omnipotence as bastions of disregard.

True freemarket anarchist proponents. They told government to shove it, while the rest of society cowered and kowtowed. When government pressures private businesses to enforce vaccine passports, i hope the taxi industry leads the way in non-compliance again.

Kudos to MoneyWeb for actually publishing objective research on the taboo subject.

If we are close to herd immunity why is the death toll and infection rate so high with the third wave?

The 5 year average death rate from all causes has not been notably changed.

It get’s more and more confusing with all the false info put out! If the immunity only lasts 6 months, then there is no such thing as Herd immunity surely, and no chance of eradicating Covid!?

Perhaps we should all be vaccinated with a small dosage of Covid itself every 6 months, isolate for a week, then get on with our lives without masks, open the economies, travel, etc.

2 weeks per year of “compromised life” compared to the BS we going through at the mo, I know what I’d take!!!

Correct – there is no way to eradicate covid: