The dollar rebound extended Wednesday as it pushed past key technical resistance. Asian stocks fluctuated with US futures as investors mulled remarks from Federal Reserve officials that pointed to a slow economic recovery.

US shares reversed earlier losses Tuesday which came after Fed Chairman Jerome Powell said the economy has a long way to go before fully recovering and will need further support. Meanwhile, Chicago Fed President Charles Evans noted that rates could rise before the inflation target is reached. Crude oil dipped and Treasuries were steady. 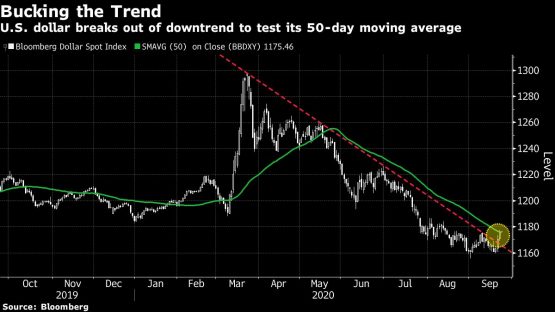 Global stocks are on track for their first monthly drop since March on the lack of another US fiscal stimulus package and an increase in global virus cases that has raised the specter of more lockdowns. British Prime Minister Boris Johnson announced new restrictions that are likely to last six months and told people to work from home if possible, saying the country is at a “perilous turning point” for the virus.

“This is a massive roller coaster and you just have to hold your stomach,” Erin Gibbs, president and chief executive officer of Gibbs Wealth Management, said on Bloomberg TV. “We are most likely to see this continued high volatility” until the US election in November, she said.