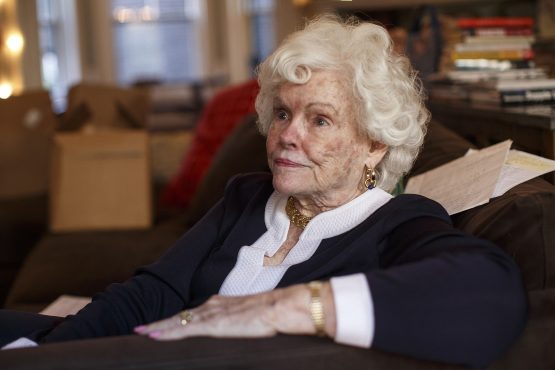 Doris Buffett, a philanthropist who with the financial assistance of her billionaire brother Warren Buffett gave life-changing gifts to people down on their luck, has died. She was 92.

Buffett died at her home in Rockport Maine on Tuesday, surrounded by family and friends, listening to Billie Holiday music, according to her grandson Alexander Buffett Rozek. Her death was reported earlier by the New York Times.

“She was an amazing women and she’ll always be with us,” Buffett Rozek said in an email.

Doris Buffett sifted through the hundreds of letters her brother received each year from people who wrote pleas for aid. Working with a group of volunteers, she identified the most deserving cases and vetted the requests. She used her resources to provide one-time gifts to help people who faced hardships: buying a used mobile home for a woman raising her three grandchildren in Maine, sending a wheelchair to someone in California, paying the funeral expenses for a manual labourer in Michigan whose teenage grandson committed suicide.

Her group, the Letters Foundation, has awarded more than $10.5 million in grants, according to its website.

“My brother is putting up the money, so we’re sort of limitless,” she told the Globe. “He’s told me that any time I run out of money, all I have to do is call him.”

Buffett created a philanthropy, the Sunshine Lady Foundation, in 1996. She said she shunned “S.O.B. charities” — the symphony, opera and ballet — that didn’t address human misery. Her group focused on families in crisis and the working poor. Another program she set up gives education scholarships to women who survived abuse by their partners.

Her efforts expanded after Warren Buffett announced in 2006 that he was leaving the bulk of his fortune to charity, most of it flowing through the Bill & Melinda Gates Foundation. Soon afterward, he was deluged with letters from strangers who asked for money.

Warren Buffett, who heads Omaha, Nebraska-based Berkshire Hathaway Inc., has a net worth of $77 billion, according to the Bloomberg Billionaires Index. He said he preferred to concentrate on the “wholesale” side of charity, targeting broad societal issues such as public health and education. When his sister agreed to handle the “retail” side, he sent her the letters — and $5 million to start. She formed a network of volunteers to help review the requests that poured in.

“There’s no question the money I give away does a lot of good but Doris is giving time, and time is the scarcest commodity,” Warren Buffett told the Globe. “No matter who you are, you have 24 hours a day, and when you give time up you’re giving up something important. So if you were keeping a scorecard in life, you’d give her a higher score than me.”

Doris Buffett was born February 12, 1928, in Omaha, where her father, Howard Buffett, was a stockbroker, according to “Giving It All Away,” a 2010 biography. He was elected to the U.S. Congress in 1942 while her mother, the former Leila Stahl, was a homemaker. Her childhood nickname was “Mary Sunshine.”

In addition to her brother Warren, she had a sister, Roberta, known as “Bertie,” who also became a philanthropist, donating more than $100 million to Northwestern University in 2015.

Doris Buffett attended George Washington University, in Washington, DC, where the family moved after her father was elected to Congress. In 1951, she married Truman Stevens Wood with whom she had three children: Marshall, Robin and Sydney. The union ended in divorce as did her three subsequent marriages.

“None of my husbands had a sense of humour,” she said.

After becoming wealthy from an an investment she made with her brother in the 1950s she lost her entire fortune, more than $12 million, in the October 1987 stock market crash. She came into wealth again in 1996 when her mother died, leaving her shares of Berkshire Hathaway stock.

“My payoff is the constant joy that I have thinking that somebody’s life is a little better,” Buffett said. “That for once in their life they have good luck, not bad luck.”