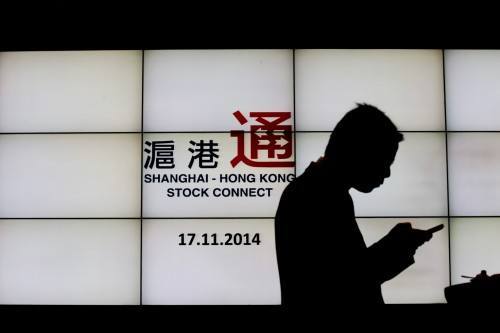 The best way to make money in China’s booming stock market has been, well, to do nothing.

Simply buying and holding would have captured the 142% return in the Shanghai Composite Index over the past year, the best performance among 23 trading models based on technical analysis such as the Bollinger band indicator and moving averages. The mean return of these tools is only 14%, according to back-testing data compiled by Bloomberg.

The absence of pullbacks since the Chinese stock rally started about 12 months ago means investors have been better off by staying put in their portfolios rather than trying to time the market through the use of buy and sell signals from technical indicators. While China’s economic data have been deteriorating and stocks are becoming pricier, investors who stick to their positions in anticipation of more policy stimulus to shore up growth are being rewarded, according to Michael Shaoul of Marketfield Asset Management.

“In a bull market, you are paid to be patient,” Shaoul, chief executive officer at the New York-based firm, said. “You are going to hold your nose and ignore much of the bad data and keep your nerve when the market puts you through periods of volatility,” said the investor, who manages about $6.5 billion and became bullish on Chinese stocks in August.

The Shanghai Composite has more than doubled since November and it has had only one monthly decline over the past year, falling 0.8% in January. Among 1,084 stocks in the benchmark index, just five have declined this year through Wednesday, including China Citic Bank, a unit of the nation’s largest state-owned investment firm.

Thirteen of the 23 trading models made money over the past year. A strategy based on momentum — buy stocks when they rise above 50-day moving averages and sell them when dropping below – – had the second-best return after buy-and-hold, gaining 123% over the past year, the data show.

The worst performing tools were those based on indicators such as Bollinger bands and trading envelopes, which alert investors to when a security rises too high or falls too low and should be sold short or bought. Traders who follow these indicators in China’s stock market would have lost all their investments.

The back-testing models purchase the Shanghai Composite Index when an indicator signals a buy and holds it until a sell is generated. At that time, the index is sold and a short position established and kept until a buy is triggered. In actual trading, the investor would need to purchase a basket of stocks or an exchange-traded fund to replicate the benchmark.

Chinese policy makers have provided the tailwind to the stock rally as they stepped up efforts to revive growth. The People’s Bank of China cut benchmark interest rates for the third time in six months on May 11 as the economy is on pace for the slowest expansion since 1990. With banks’ reserve ratios still at 18.5%, there’s room to ease the monetary policy further.

“Slower growth is actually better for Chinese stocks because it signals fewer excesses as well as the ability for the government to be more accommodative,” Henry McVey, global head of macro and asset allocation at KKR & Co., which manages $99 billion in assets, wrote in a note on May 14.

While some sectors such as technology companies, are expensive, others including dual-listed companies in Hong Kong, which trade at a discount of more than 20% than their equivalent shares on the mainland, will “perform well,” he wrote.

It will become more challenging for buy-and-hold strategies to continue to perform because a flood of initial public offerings and the government’s crackdown on stock speculation will increase market volatility, according to Michael Wang, a London-based strategist at hedge fund Amiya Capital LLP.

More than 120 newly listed companies have started trading so far this year, almost matching the total for all of 2014.

“Buy-and-hold works best when there isn’t a lot of volatility,” Wang said. “I don’t think it will stop in a dramatic way,” but “we could see some more volatility” in coming months, he said.

Chinese officials have voiced their support for the stock market as they encourage companies to reduce reliance on debt.

In their latest step to open up the capital market, the government said Friday that Hong Kong and mainland investors would be allowed to buy mutual funds in each other’s markets starting July 1. That comes six months after the start of a stock link program that allowed international investors greater access to the Shanghai market. A similar link between Shenzhen and Hong Kong is due to start this year.

The market opening and an increasing number of retail investors shifting their bank savings to the stock market will provide momentum to the equity rally, said Toby Lawson, Sydney- based head of global markets, Australia, Societe Generale.

“It’s hard to see liquidity is going to dry up in a hurry,” said Lawson in an interview on Bloomberg Television on May 25.