The European Central Bank will get much of the evidence it needs this week to justify adding more monetary stimulus as the resurgent coronavirus rampages across the continent.

While economists and investors don’t expect policy action at Thursday’s virtual meeting, they do want a signal from President Christine Lagarde that more support will almost certainly be coming before the end of the year.

Confidence gauges are set to show businesses and consumers turning despondent as a second wave of the pandemic forces renewed lockdowns. Economic data will highlight falling prices and elevated unemployment, and the sole bright spot — a strong summer rebound in gross domestic product — is already out of date. 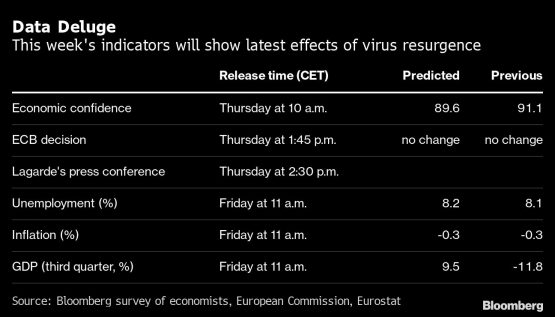 “The market will probably be disappointed if it doesn’t get a clear hint at more action in December,” said Gilles Moec, chief economist at AXA SA. “By acting now the ECB would show determination, but we have some major sources of uncertainty.”

A key calculation facing officials is how much stimulus the economy needs, and in that regard they have time to think. With more than half the 1.35 trillion-euro ($1.6 trillion) pandemic bond-buying program still unspent, they have plenty of firepower, and can accelerate purchases if needed.

Economists predict another 500 billion euros will be added in December, when policy makers will have updated economic forecasts that include a first projection for 2023.

They might also have a clearer view of critical issues by then, including the US presidential election, any UK trade deal with the European Union, the impact of Covid-19 containment measures, and progress toward a vaccine.

Investors are likewise betting on more ECB bond-buying by the end of the year. Yields have plunged, and S&P Global Ratings unexpectedly raised the outlook for Italy’s government debt on Friday, highlighting the positive impact of central-bank support.

“The clouds are darkening over the euro-area economy and ECB President Lagarde will have to acknowledge that.”

Lagarde has already warned that the economy is in deeper trouble than hoped. While the ECB’s current projections assume an uneven recovery, she said this month that the resurgent spread of the virus has come sooner than scientists expected and that is “not a good omen.”

Purchasing managers’ indexes show growth has slowed dramatically since the summer, and could shrink in the final three months of the year. France’s private-sector output contracted in October, and German business confidence fell for the first time in six months. Spain and Italy are being battered as tourists are kept away. 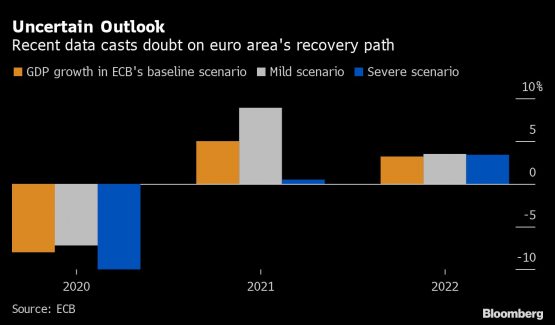 More bond purchases by the ECB can’t do much to revive demand during the pandemic, but they can keep markets stable as governments raise spending and debt burdens to levels unprecedented in peacetime to protect jobs.

“Further bond purchases will not solve the subdued outlook for inflation and the wider economy,” said Piet Christiansen, chief strategist at Danske Bank. “The most important task for the ECB is to backstop and support fiscal stimulus packages by resolving potential market fragmentation.”

Even when this phase of the crisis is past though, ECB officials will need to address their primary mandate: price stability. They’ve fallen short of their inflation goal of just-under 2% for years, and the rate has been below zero since August.

Chief economist Philip Lane, who writes the monetary policy proposals, has made clear that he intends to rectify that as soon as possible, returning price growth to the pre-pandemic path.

“The ECB appears likely to be compelled to express increased concern,” JPMorgan Chase & Co. economists led by Bruce Kasman wrote in a report. While there is good reason to hold fire for now, it will send “a clear signal that some further support will be needed.”