European Central Bank officials are poised to reveal just how their new monetary strategy, unveiled with fanfare earlier this month, will actually make a difference to investors.

At their decision on Thursday, policy makers will tweak their stance to reflect changes ranging from a slightly higher inflation goal of 2% to an explicit allowance that they might overshoot it for a while. ECB President Christine Lagarde has already primed financial markets, saying they should prepare for new guidance on stimulus “given the persistence that we need to demonstrate to deliver on our commitment.” With investors growing more confident that interest rates will remain low for the foreseeable future, there’s a high bar for the ECB to provide any surprises.

Any change in guidance “lets them reinforce a truly dovish message,” said Richard Kelly, head of global strategy at Toronto Dominion Bank. “But it still feels like the ECB has a high hurdle to convincing the market that this is a forceful change compared to what’s been expected from them already.”

The euro-zone central bank is pursuing an increasingly lonely policy path of maintaining emergency settings as counterparts across the globe debate instead how and when to start paring back stimulus. ECB Executive Board member Isabel Schnabel has suggested officials would need to see durable price pressures before considering a shift in stance.

Further signals that rates are on hold should flatten the curve and put downward pressure on core rates, according to Nick Kounis, head of macroeconomic research at ABN Amro NV. Strengthened forward guidance could be powerful if it’s “concrete and credible enough,” he said.

What Bloomberg Economics says:
“The Governing Council will commit in its forward guidance to keeping interest rates unchanged until inflation is forecast to reach or slightly surpass 2%, and remain there for some time within the central bank’s projection period of two to three years. That would be a significant change from the previous wording, which only called for convergence toward the inflation target, and reflect a more vigorous commitment to reaching the goal for price growth.”

Elsewhere, the Bank of Russia and the South African Reserve Bank are likely to make more eventful policy announcements than usual, Joe Biden’s fiscal plans face a test and South Korean trade figures will provide clues on the health of global demand.

U.S.
In Washington, an important test looms for the fiscal packages President Biden has been seeking from Congress to ramp up both infrastructure investment and social spending, as well as increase taxes to address inequality. Senate Majority Leader Chuck Schumer set Wednesday for a vote on infrastructure and a verbal agreement on the bigger social package.

With some economists saying the twin initiatives could help bolster longer-run productivity and labor-force participation, legislative movement on Wednesday could lift optimism about the post-pandemic prospects for the world’s largest economy. Setbacks would cloud the outlook for potential final enactment for the bills in the sharply divided Senate and House in the fall.

The infrastructure plan weighs in at $579 billion in net new spending over five years, while the social spending bill is $3.5 trillion over a decade.

Meanwhile, investors are also watching for data on housing starts and previously owned home sales to gauge the strength of residential real estate. Another report at week’s end offers an early look at this month’s pace of expansion in manufacturing and services. Federal Reserve officials are in blackout ahead of their next policy meeting.

Europe, Middle East, Africa
Aside from the ECB decision, survey indicators that should show a buoyant rebound in the euro area from the coronavirus crisis will provide the main points of interest there.

The reports due include a region-wide consumer confidence gauge for July, seen rising to the highest level in 20 years, and purchasing managers indexes that economists anticipate will show further improvement in economic activity from the strongest expansion since 2006 already recorded in June. 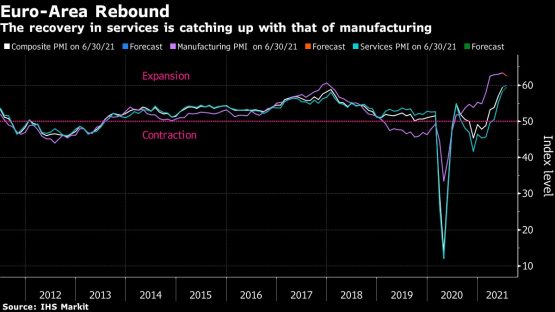 In the U.K. meanwhile, retail-sales data on Friday is expected by analysts to show a moderate increase from the previous month’s drop, underscoring how the country’s consumer-spending landscape is normalizing after some volatile months as lockdowns eased.

Regarding implications for monetary policy, Bank of England official Jonathan Haskel will share his views on the long-term effects of the pandemic with a speech on scarring on Monday, the day the England lifts most restrictions introduced to limit the spread of Covid-19.

Further east, Croatia’s central bank governor, Boris Vujcic, may give details about the country’s planned entry in to the euro zone at a conference in Dubrovnik at the start of the week, and Ukraine will have a monetary decision on Thursday. On Thursday, South Africa is unlikely to bring forward the first rate increase from late 2021 or early 2022, even after inflation reached a 30-month high in May. Bloomberg Economics predicts the SARB will probably deliver a more hawkish statement.

Russia is expected to raise its key rate by 75 basis points or more on Friday, with inflation running well above target and showing no signs of easing. Prices for highly sensitive basic foods like beets, potatoes and carrots have soared, turning inflation into a political problem.

Asia
Japanese inflation figures are likely to show another month of fractional price increases, while trade data will point to continued export gains of more than 40% from the dismal levels of a year ago.

Preliminary South Korean trade figures for July will offer a more up-to-date indication of the current strength of global demand.

Minutes from the Reserve Bank of Australia’s July meeting may shed more light on its decision to only extend quantitative easing for a couple more months and at a slower pace. Meanwhile China will set its loan prime rate on Tuesday and Indonesia has a policy gathering on Thursday.

On Friday, Japan will mark the start of the Tokyo Olympics with a public holiday, though people will have to stay home and watch the opening ceremony on their devices due to an ongoing state of emergency that’ll leave stadiums empty to contain the coronavirus.

Latin America
Colombia’s economy is likely headed for a decade-best expansion in 2021 but the massive nationwide protests in May probably undercut that month’s GDP proxy data to be posted Monday. Last week’s reports on sales and output for the month showed dramatic declines from April.

Argentina’s economic activity readings for May released Wednesday will likely again feature out-sized year-on-year results — flattered by the base-effect — and a fourth consecutive monthly decline. The export and import report for June should be consistent with forecasts for a strong 2021 trade balance.

As to the region’s second-largest economy, look for Mexico’s May retail sales data — already above pre-pandemic levels in March — to point to firming demand. Perhaps more crucially, the mild deceleration expected in the mid-month consumer price readings posted Thursday may ease pressure on the central bank, whose forecasts see inflation slowing toward year-end.

Brazil’s mid-month inflation readings are less significant by comparison: the central bank has already penciled in a rate increase of at least 75 basis points from the current 4.25% with more tightening to come.