Officials made conciliatory noises about a destabilising trade conflict with the US, giving hope to Chinese stocks.
Sruthi Shankar, Reuters  /  15 May 2019 11:18 Emerging markets have seen large capital outflows since the launch of the latest round of tit-for-tat trade restrictions between US and China. Picture: Aly Song, Reuters

Hopes of more stimulus for China’s slowing economy lifted emerging market stocks from a near-four month low and steadied currencies on Wednesday, as officials made conciliatory noises about a destabilising trade conflict with the United States

Emerging markets have seen large capital outflows since the launch of the latest round of tit-for-tat trade restrictions by Washington and Beijing earlier this month, knocking nearly 6% off the MSCI’s developing world stock index.

Beijing, however, has rapidly responded to every threat to the stellar growth that has propped up the world economy for a decade, and hopes of new stimulus measures pushed China’s main indexes higher.

The blue-chip CSI300 and Shanghai composite indexes both closed up about 2%, while stock markets in Taiwan, South Korea, Russia and South Africa gained between 0.3% and 0.8%.

“The hard data (out of China) seem to point to a still fragile footing of the real economy. But one thing is clear: the Chinese authorities will take (or have already taken) actions to prevent an economic slump,” Commerzbank analysts wrote in a note.

“Market participants seem to mainly rest their hopes on continued negotiations between Washington and Beijing.”

US President Donald Trump spurred a bounce for Wall Street on Tuesday by saying he had a “very good” dialogue with China and insisting talks between the world’s two largest economies had not collapsed.

Most developing world currencies trod water against a broadly firmer dollar, although the Turkish lira was an outlier, down about half a percent as officials set a 0.1% BSMV bank and insurance tax on some forex sales.

Turkey has been at the top of emerging investors’ worry list for most of the past year due to political instability, spats with the United States and concerns over political interference at the central bank.

Data from the Turkish Statistical Institute showed unemployment was steady at 14.7% – the highest in nearly a decade – in the January-March period. Turkish stocks also fell about 0.8%.

The Indonesian rupiah weakened as much as 0.2% as Southeast Asia’s largest economy posted its widest trade deficit in history in April.

In Eastern Europe, the Czech crown edged up against the euro after government data showed the Czech economy expanded a touch faster than expected in the first quarter, rising by 0.5% on a quarterly basis.

The Polish zloty and the Romanian leu also firmed ahead of central bank meetings with interest rates expected to remain on hold.

Another set of GDP data showed Romania’s economy expanded 5% on the year in the first quarter, sharply above market expectations of 3.9%, while Poland’s growth rate of 4.6% was slightly above the anticipated 4.5%. 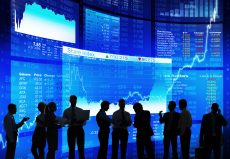 Why are loan requirements for commercial property so onerous?

Hilton Tarrant / 25 May 2020
Was Patel’s laughing stock of a clothing list the proverbial last straw?
13