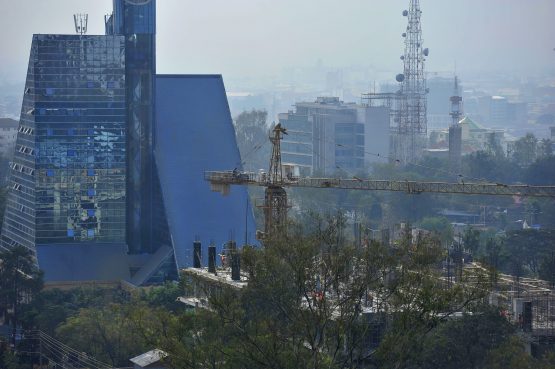 A construction crane operates above a new building on the city skyline in Nairobi, Kenya. Picture: Riccardo Gangale/Bloomberg

East African countries plan to increase spending dramatically on infrastructure projects in budgets to be released Thursday. It’s not clear they can afford it.

Kenya, Tanzania, Uganda, Rwanda and Burundi will unveil plans to fund the building of more roads, railways and power plants, as well as expand services such as health care and education, for the year starting July 1. In most cases, this will raise budget gaps as a percentage of gross domestic product, and increase borrowing requirements.

“There is a risk of rising fiscal deficits coming from the fact that many have ambitious revenue targets they may fail to meet,” said Tony Watima, a Nairobi-based independent economist.

Spending will probably climb about 10% in Kenya in the next fiscal year, 17% in Uganda and 11% in Rwanda, while it will be broadly flat in Tanzania, the nations’ respective governments have said in forecasts.

While the governments forecast that revenue will increase by double digits next year, Kenya, Uganda and Tanzania all have plans to approach the debt markets to help raise the funds to finance their deficits. In Kenya’s case, the nation will borrow about 607 billion shillings ($6 billion) locally and internationally in 2019-20, according to Treasury Secretary Henry Rotich. GDP in East Africa will probably expand 5.9% in 2019 and 6.1% in 2020, according to the African Development Bank, making it the fastest-growing region on the continent.

Kenya is implementing its so-called Big Four agenda, which will see the region’s largest economy hand over no less than 500,000 houses to first-time homeowners by June 2022, and develop more manufacturing, food production and health care to create jobs in a nation where unemployment is a sticking electoral issue. The projects will cost 405 billion shillings ($4 billion) in the coming year, budget estimates show. If approved by lawmakers, about 7.5% of Tanzania’s 33.1 trillion-shilling ($14 billion) budget will go toward building a standard-gauge railway line that will link the East African nation’s commercial city of Dar es Salaam with the town of Mwanza along Lake Victoria, through the capital, Dodoma. The country is due this month to start building the 2 115-megawatt Rufiji hydropower project.

The International Monetary Fund in April said that Tanzania’s economy is being harmed by the “unpredictable and interventionist policies” of President John Magufuli’s government. It said this in a report whose release the East African country has blocked. “The Magufuli administration hasn’t done a good job in enticing investors to enter the country, and erratic policy making will in fact continue to have the opposite effect,” said Jacques Nel, the chief economist for southern and eastern Africa at NKC African Economics.