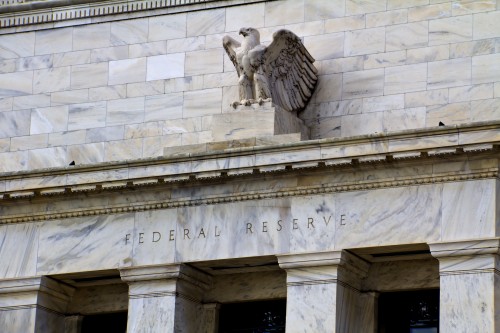 The Federal Reserve began a two-day policy meeting on Wednesday with economists evenly split on whether Thursday will see the first official US interest rate rise since 2006.

The decision by the US central bank’s Federal Open Market Committee (FOMC) is expected on Thursday at 2 p.m. (1800 GMT).

US economic data are flashing conflicting signals, with unemployment falling but inflation subdued, while slowing growth in China has led to a 40% fall in Shanghai stocks in three months, leaving global markets on edge.

Global banks and investment funds see the chances for a rate increase as essentially a toss-up, although most experts see a slightly higher probability for no change in monetary policy.

In a Reuters poll of 80 economists, 45 said the Fed would keep its benchmark interest rate between zero and 0.25%, while 35 expected a hike.

Among primary dealers, 12 banks expect it to hold steady and the remaining 10 expect a rate increase.

“You can make a strong case either way for the Fed to begin raising interest rates or waiting,” saidRyan Sweet, a senior economist at Moody’s Analytics in West Chester, Pennsylvania.

“The prudent risk management approach would argue for them to hold off, but if the Fed was really data dependent there is a very strong case to raise rates on Thursday.”

Based on trading in Chicago Mercantile Exchange fed futures contracts, though, financial markets on Wednesday saw only a 23% chance of a rate rise at Thursday’s FOMC meeting.

The Federal Reserve is mandated by Congress to consider both unemployment and inflation when formulating monetary policy.

The US unemployment rate fell to 5.1% in August, a level the Fed sees as likely to boost both wages and inflation, but average hourly earnings have risen only 2.2% in the past year.

However, even with the federal funds rate target at 0.00-0.25% since 2008, there has been little sign of US inflation while economic growth was running at a 3.7% annual pace in the second quarter of this year.

In data reported on Wednesday by the US Labor Department, consumer prices unexpectedly fell in August as gasoline prices resumed their decline and a strong dollar curbed the cost of imports. The dollar has gained 17.1% against the currencies of the United States’ main trading partners since June 2014.

The Consumer Price Index slipped 0.1%, the first drop since January, after edging up 0.1% in July. In the 12 months through August, the CPI rose 0.2% after a similar gain in July.

So-called core CPI, which strips out food and energy costs, ticked up 0.1% last month after a similar rise in July.

The prospect of a rate rise has strengthened the dollar in the past year, while weakening emerging market currencies already hit by falling demand for commodities from China.

Stocks on major world markets tumbled in August as a result, with the JP Morgan world index falling 7.0% and the US S&P 500 index off 6.0%.

“We think the recent global market volatility – driven by ongoing concerns about global growth – has raised the bar for a first rate hike near term.”