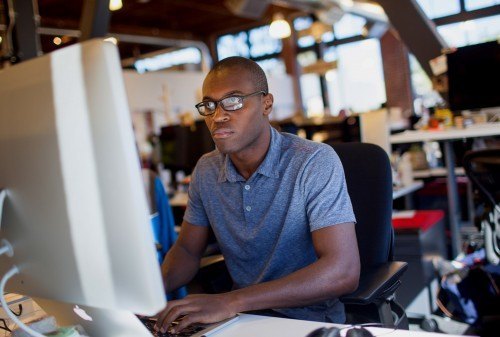 Earnings season has just kicked off, and we’re already starting to get a pretty clear map of where in the world technology companies face the biggest problems. A global tech company’s financial performance isn’t just about how many gadgets or ads it can sell. Geopolitical tensions, currency swings, and economic turmoil can all affect a company’s bottom line.

Some new global developments could create big ripple effects later, such as Google’s face-off with European Union antitrust regulators, and ongoing market transitions that companies are still grappling with, such as emerging markets’ desire for cheaper smartphones. We’ve boiled the list down to four of the biggest factors squeezing big U.S. tech companies’ earnings right now.

When the value of the U.S. dollar is high compared with other currencies, it usually means the economy is in good shape, and tourists’ cash goes a lot further on vacation. While it’s good for average Americans, it hits U.S. tech companies right where it hurts: revenue. Tech is especially vulnerable to currency fluctuations because it’s such a global industry.

International sales are worth less when weak local currencies get converted back into dollars. Facebook lost 7 percentage points of revenue growth to the effects of the strong dollar last quarter, according to the company. At IBM, the impact was 8 points. Microsoft took a 3 percentage point hit, and that’s expected to get worse in the current quarter, when the company is likely to take a 4 percentage point cut, predicts Microsoft Chief Financial Officer Amy Hood. VMware blamed currency—and currency alone—for its reduced forecast, as CFO Jonathan Chadwick emphasized more than once on a call with analysts. “Note that there has been no change to revenue guidance for 2015, except to adjust for the increased impact of currency,” he said on the company’s April 21 earnings call.

Companies were holding up during the dollar’s initial rise last year, but they really started to feel pain in December, says John Lovelock, the chief forecaster at market research firm Gartner. That’s when financial techniques such as foreign exchange hedging, a common practice to minimize risks from devaluing currencies, ran out of steam for many companies. “The rapid change in the dollar from December through February has caught everybody off guard,” Lovelock says. “They are left with no card left to play.” To contend with currency effects, U.S. companies may have to raise prices, as Apple did in Russia last November, or try to degrade product offerings in certain countries to make them cheaper to produce—for example, less memory in phones, or fewer services bundled with products, Lovelock says.

Abenomics isn’t just losing fans at home. Global electronics makers and e-commerce companies are getting punished by the consumption tax Prime Minister Shinzo Abe pushed through in April 2014. Consumer spending cratered immediately after (which was to be expected), and the economy still hasn’t fully recovered (not expected).

The tax hike, from 5 percent to 8 percent, deflated an economic recovery in Japan that had been gaining momentum in 2013, pushing Japan into recession last year. Apple and Amazon reported slowdowns in the country attributed to the new tax on consumers.

At this point, the problem may be most significant for Microsoft, which counts Japan as its biggest geographic contributor by revenue after the U.S. Sales there dropped $550 million last quarter. Unlike in some countries, where corporations sign multiyear licenses for Microsoft programs, most Office and Windows revenue in Japan comes from one-off purchases. When no one is buying, it’s a real problem. “Japan is just such an important  market for us,” says Microsoft’s Hood. “The Japanese macroeconomic weakness will certainly continue.”

The complicated relationship between China and the U.S. often spills over into the private sector, and tech companies bear the brunt of diplomatic and political kerfuffles they have little to do with. Since May, when the U.S. charged five Chinese military officers for allegedly stealing corporate secrets, Beijing has stepped up pressure on U.S. companies.

Apple, Google, and Microsoft have been recent targets for criticism from state-owned media. China is aiming to purge foreign technology from banks, the military, state-owned enterprises, and key government agencies by 2020, people familiar with the matter told Bloomberg in December. Chinese anti-monopoly investigators are going after Microsoft, and they raided its offices in four cities last summer. The government has labeled Microsoft as a tax evader to the tune of $150 million, and Windows 8 has been excluded from the official government-purchase list. In the last two quarters, Microsoft has reported that geopolitical issues in China are hurting sales there, and Hood says she doesn’t expect conditions to change this quarter.

Cisco Systems Chief Executive Officer John Chambers recently told analysts that the company continues to see challenges for networking equipment sales in China, leading to a 19 percent decline in its business there last quarter. Top storage vendor EMC blamed China, as well as Russia (more on that later), for a shortfall in its main business, saying the lower-than-expected sales there were “due to increased scrutiny of U.S. technology purchases in the government and financial services sectors.”

Don’t freak out too much. It’s possible to come back from a fight with Chinese regulators with just a few bruises. An antitrust probe on mobile chipmaker Qualcomm ended with a$975 million fine and new terms for smartphone makers to license the company’s technology. Two months later, Qualcomm reported progress in its China business. During its earnings call on April 22, Qualcomm said it is signing new licensing agreements in the country that should ensure future business there.

4. The wrath of Putin

Russia’s frosty relationship with the U.S. is leaving many tech companies out in the cold. The conflict with Ukraine and the resulting sanctions imposed by President Barack Obama have sent the ruble plummeting and put Russian President Vladimir Putin in defense mode.

Not only does the weak ruble make doing business in Russia less desirable, the country is looking to lessen its reliance on foreign software—partially a response to sanctions and partly to spying fears stoked by the Edward Snowden leaks. Earlier this month, Foreign Minister Nikolay Nikiforov signed a plan to replace software made outside of Russia by 2025. That’s bad news for Hewlett-Packard, IBM, Microsoft, Cisco, and Oracle, as well as for Germany’s SAP, which had combined revenue of 285 billion rubles ($8.1 billion) from Russia in 2013, according to estimates by the Russian Academy of Sciences.

U.S. companies such as Microsoft and EMC are starting to feel the pinch. EMC said on April 22 that the Russian economy affected last quarter’s earnings. In February, HP CFO Cathy Lesjak noted “continued challenges” in Russia, “where political and economic concerns are ongoing.” Even such smaller companies as Seattle’s F5 Networks are getting squeezed. Incoming CEO Manny Rivelo says: “Russia is a wild card for all of us due to the political environment. It isn’t as easy to land sales there as it was a couple of years ago.”

Beyond nationalistic pride, buying local is more attractive when the currency is weak because domestic products are relatively cheaper, says Gartner’s Lovelock. While there’s a limit to what Russia can do in tech, “they are having some success,” he says. “But there’s no Russian Windows or Russian Oracle database or Russian Hadoop.”