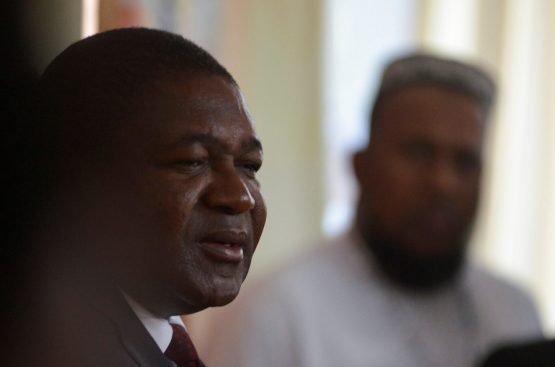 Court documents filed in London reveal that the shipbuilding company and the French-Lebanese businessman made payments to Nyusi and other senior officials after negotiating contracts for government maritime projects.

They denied the remittances were bribes or illegal, and said they were understood to be campaign donations or for investments.

The allegations about the payments are contained in court filings in London that Privinvest and Safa submitted in response to a case Mozambique’s attorney general brought in 2019. The case relates to $2 billion in loans Mozambique borrowed from banks including Credit Suisse Group AG in 2013 and 2014 to pay for a coastal-protection system and a tuna-fishing fleet.

Nyusi, who was the ruling Frelimo party’s candidate for president at the time a payment was made to him in April 2014, was “at the very centre” of matters that the nation’s attorney general raised in its case, said Privinvest and Safa. The two are among 12 defendants in the case.

Nyusi wasn’t president at the time the payment was made and under Mozambican law was allowed to receive political donations, Frelimo spokesman Caifadine Manasse said by phone on Friday, responding on behalf of both the party and Nyusi to requests for comment. Mozambican law prohibits public servants from receiving personal payments.

“President Nyusi is exempt from hidden debts and the Frelimo party has nothing to do with hidden debts,” Manasse said.

Mozambique revealed in 2016 that it failed to publicly disclose the majority of the $2 billion of foreign loans it raised to finance the maritime projects, breaching conditions of an International Monetary Fund (IMF) accord.

That led the IMF and a group of European donors to halt financing to the government, and the following year the nation defaulted on its debt.

US prosecutors in 2019 said the projects were part of a fraud and money-laundering scheme that victimised US investors.

Nyusi, who was elected president in 2014 and won a second term five years later, hasn’t been charged with any offence.

“President Nyusi was at all material times aware of the projects, the financing thereof, and the nature of the goods and services supplied by Privinvest,” the company and Safa said in the court filings.

“He requested political campaign contributions from Privinvest, met directly with Mr Boustani in relation to those contributions and the projects more generally, and was directly involved in the conception of the projects in his then-role as minister of defence.”

Mozambique’s government has claimed that the maritime projects were fraudulent because Privinvest paid bribes to senior officials including then-finance minister Manuel Chang. Privinvest says that if payments to Chang were bribes, then Nyusi is guilty too.

“Nyusi himself received and/or benefitted from payments made by Privinvest, with the consequence that it is dishonest and/or misleading to now present them as bribes unless the republic is to suggest that the payments to President Nyusi were also bribes,” the company said in the filings.

Privinvest said that in addition to the $1 million it paid Nyusi in April 2014, it also paid for a Toyota Land Cruiser for him to use while campaigning, according to the filings.

Nyusi also asked Boustani in an August 2014 meeting at Paris-Le Bourget Airport in France for “further campaign contributions and/or assistance from Privinvest”, it said. That was after the company had already paid Frelimo $10 million to fund campaigns, the filings show.

Privinvest also claimed Nyusi asked Chang to sign the loan guarantees for the projects. The company admitted to paying Chang $7 million when he was finance minister, but said the payments were investments in future business ventures and campaign funds, not bribes.

Chang, who has denied any wrongdoing, has been in custody in South Africa for more than two years while that country decides whether to extradite him to either Mozambique or the US.

Mozambique’s case in London seeks the court’s nullification of a government guarantee on a $622 million loan arranged by Credit Suisse for state-owned ProIndicus, claiming that the debt along with the rest of the $2 billion loans were all part of a “fraudulent scheme”.

Mozambique is pursuing the case in London where Credit Suisse’s local branch acted as the agent for the loan.