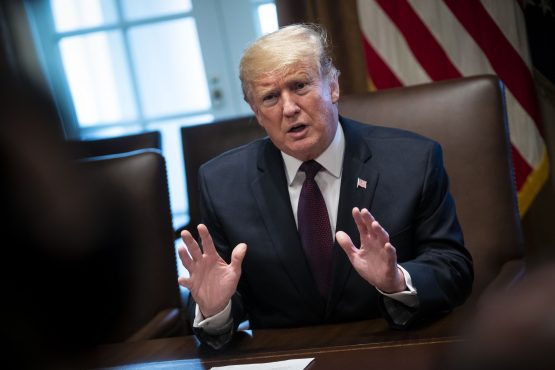 Global financial markets tumbled on Monday after US President Donald Trump unexpectedly jacked up pressure on China to reach a trade deal in the midst of negotiations, saying he would hike US tariffs on Chinese goods this week.

Equity markets, which have been largely expecting the two sides to reach a trade accord soon, fell sharply as further talks to end their bruising trade war were thrown into doubt.

Chinese shares plunged more than 6% at one point, while US stock market futures fell close to 2%. Oil prices sank and the Chinese yuan weakened sharply.

Trump sharply escalated tensions between the world’s two largest economies with tweeted comments on Sunday that trade talks with China were proceeding “too slowly”, and that he would raise tariffs on $200 billion of Chinese goods to 25% on Friday from 10%.

He also said he would target a further $325 billion of Chinese goods with 25% tariffs “shortly”.

The tweets upended the previously calm market mood that had benefited from signs of improving economic growth in China and the United States, and from comments from Trump and other senior US officials that trade talks were going well.

“I think this has got the potential to be a real game-changer,” said Nick Twidale, Sydney-based analyst at Rakuten Securities Australia.

“There is still a question of whether this is one of the famous Trump negotiation tactics, or are we really going to see some drastic increase in tariffs. If it’s the latter, we’ll see massive downside pressure across all markets,” he said.

MSCI’s broadest index of Asia-Pacific shares outside Japan was down 1.9%, after earlier losing more than 2%.

Chinese blue-chips lost more than 6% at one point in the morning session, having closed higher before a three-day national holiday amid expectations that pressures on China’s economy were easing. They later clawed back some losses, and were last down 5.3%.

The drop in Chinese shares came despite a move on Monday by China’s central bank to cut reserve requirements for small banks to help boost lending to small and private firms.

Australian shares were off 0.9%.

Japanese financial markets remain closed until Tuesday for a national holiday, but Nikkei 225 futures were down 2.3% at 21,965.

E-Mini futures for the S&P 500 slid 1.9%, erasing memories of gains on Friday after the US payroll data had helped to lift Wall Street and signalling a rough open for US stocks on Monday.

“The risk for (Trump) is that the Chinese don’t play ball and don’t go ahead with the negotiation,” said Shane Oliver, head of investment strategy at AMP in Sydney.

“It’s not in his interest for shares to go down as it would hit US business confidence and investment, and that would shoot up unemployment. And that would be a risk for his re-election, too,” he said.

More easing on the way?

The flight from riskier assets boosted interest in safe havens, pushing US Treasury futures up 19 ticks. Data from CME Group showed the market now sees a 58.5% chance of a Federal Reserve rate cut by the end of the year.

Chinese 10-year treasury futures also jumped, with the most-traded contract, for June delivery rising as much as 0.5%. They were last up about 0.3% at 96.850.

“The intensified trade and geopolitical risks are likely to prompt the regional central banks for more stimulatory policies,” analysts at ING said in a note. “We expect the majority of Asian central banks meeting this week to cut their policy rates.”

As investors flocked to the safe-haven yen, the dollar dropped 0.5% against the Japanese currency to 110.56 .

But China’s yuan plunged, with the offshore unit weakening to 6.8215 per dollar, its weakest level since January 10, before paring some losses.

The tweets have compounded pressure on prices amid signs of a rise in US output, which has surged by more than 2 million barrels per day since early 2018.