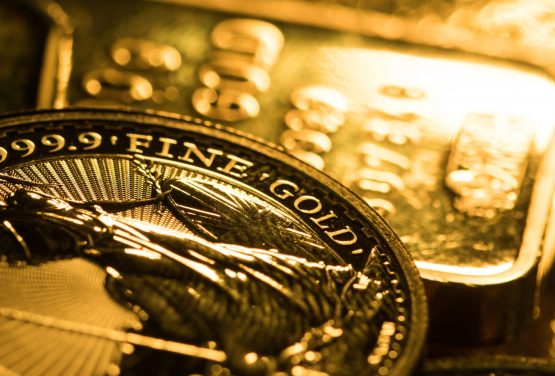 Gold is playing its age-old role as a safe haven in times of wars and crises, and people all over the world are piling in.

Russia’s invasion of Ukraine has sent the price of everything from oil and gas to wheat and metals skyrocketing, sparking inflation fears and threatening global growth. That’s driving retail investors everywhere from Vienna and Singapore to New York to the safety of gold, which spiked to $2,070.44 an ounce, close to the record reached during the pandemic.

The almost 10% surge in gold prices since the start of the year is turning into a boon for bullion dealers like Rudolf Brenner, founder of Philoro Edelmetalle GmbH, whose shops in German-speaking Europe now have long lines of buyers — a trend that’s likely to continue with the conflict showing no signs of abating.

“When the crisis in Ukraine started, we saw massive orders” said Brenner, whose sales are triple their normal level. “People are buying everything.”

Similar stories are emerging from gold dealerships around the world. At Empire Gold Buyers in New York, Chief Executive Officer Gene Furman says 30% of his customers trading luxury items like watches and jewelry want bullion instead of cash. Gregor Gregersen, founder of Silver Bullion in Singapore, saw gold and silver sales rise 235% in the first week following Russia’s invasion, and demand has only intensified since.

“Investors are thinking along the lines of a worst-case scenario with the war in Ukraine and are finding it prudent to buy physical safe-haven assets in a safe jurisdiction like Singapore,” Gregersen said.

The soaring demand comes after an already strong year for physical metal buying, particular in western nations. Demand for bars and coins hit 1,124 tons in 2021, according to the World Gold Council, the highest in almost a decade. That helped support prices at a time when institutional investors weren’t dipping in as much. 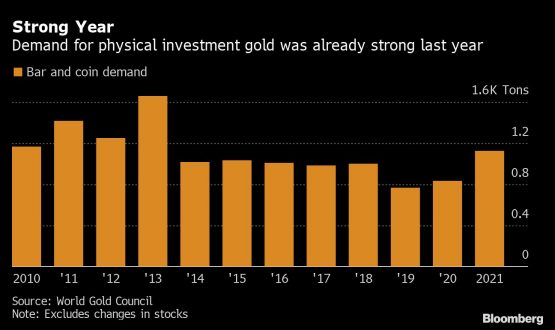 The current clamour for physical gold is causing already high premiums on retail investors’ favourite versions of the metal to extend gains, a sign of their scarcity. To get their hands on a one-ounce bar, buyers may need to cough up as much as $100 over the spot price.

Premiums are up about 25% at physical bullion brokerage Goldcore and are expected to rise further, according to its chief executive officer, Stephen Flood. In his view the main driver is concern about the financial sanctions on Russia, which have “politicised and weaponised” the payments system.

“It’s the ultimate backup plan to have the metal within reach,” Flood said. “Everyone and their mum is looking at precious metals now.”

But it’s not a one-way street. Many are bringing their bars, coins and jewelry back to the dealers to cash in on prices that haven’t been this high since the summer of 2020. Back then, there was a spike in activity as lockdowns eased and people flocked to gold stores to trade in the haven.

Still, there are more gold buyers than sellers now, according to Ash Kundra, who runs J Blundell & Sons in London’s historic Hatton Garden jewelry quarter. He attributes it to the far more fearful environment among retail investors.