Gold edged down as a new wave of virus restrictions in Europe hit sentiment, boosting the dollar, while chances of a pre-election stimulus in the US looked slim.

European stocks slid toward their biggest fall in three weeks after Germany, Italy and the Czech Republic posted record increases in virus cases. France imposed a curfew in nine of the country’s biggest cities, including Paris, while London is set to implemented new measures on households. The dollar gained on haven buying, putting pressure on bullion

The continent’s leaders will gather in Brussels for a summit on Thursday as discussions with the UK over their future relationship enter a critical phase. Negotiations remain at a stalemate, with France refusing to drop demands on fishing rights. Failure to make progress at the summit will lead to the canceling of the talks, setting up the already beleaguered region for more economic pain at the end of the year.

In the US, Treasury Secretary Steven Mnuchin on Wednesday blamed politics for undermining months-long negotiations for further fiscal stimulus. “At this point getting something done before the election and executing on that would be difficult, just given where we are in the level of details,” Mnuchin said at the Milken Institute Global Conference. 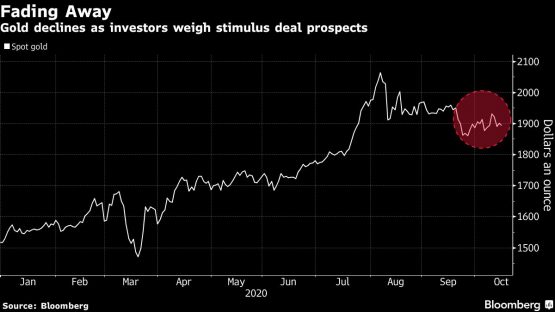 “Absent a shock to risk sentiment, it appears gold is stuck in a holding pattern before the November 3 US election,” according to a report by Macquarie Wealth Management, noting gold has largely been driven by newsflow over stimulus chances. “It looks increasingly likely that any package will be a post-election event, albeit that this could result in a larger boost than any pre-election compromise would have delivered.”

In other precious metals, spot silver dropped 1.9%, platinum declined 0.7% and palladium edged down 0.3%.

The world has gotten used to the covid19 pandemic and it can only get beter from here, thus do not expect the gold price to stay at these levels for very long.